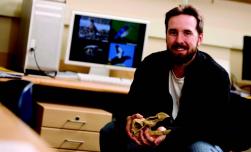 Dr. Andrew Iwaniuk is an assistant professor in the Department of Neuroscience. He is interested in understanding the neural and behavioural effects of chemical exposure by using multiple methods in both the laboratory and in the field.

This research includes: gaining a better understand­ing of the role of the brain and hormones in controlling natural behaviours, the effects of specific classes of chemicals on neural development and the neural and behavioural effects of newly emerging contaminants, such as perfluorinated and polybromi­nated compounds.

His current research addresses two main questions: 1) how have the brain and behaviour evolved in concert with one another; and 2) what are the neurobehavioural effects of exposure to persistent organic pollutants?

What first piqued your interest in your research discipline?

As a graduate student, I was stunned by how little was known about why different species behave differently. I decided to then start filling in the gaps by examining how the anatomy of the brain varies from one species to the next and how this varia­tion is related to its behaviour.

Currently, I am examin­ing how male Ruffed Grouse produce their unique drumming display and how females might be detecting the extremely low frequencies that make up the drumming sound. I am also test­ing the effects of environmental contaminants on developing birds to better understand how environmental pollution disrupts the development of the brain and behaviour.

How is your research ap­plicable in “the real world”?

My research addresses fundamental questions regarding how the brain modulates behav­iour in different species, which is one means by which we better understand how the brain works.

In addition, Ruffed Grouse are in decline across much of eastern North America and by better understanding their court­ship display (i.e., drumming) we can make more informed deci­sions about habitat management for them.

My contaminants research also has significant implications for deciding what chemicals we use, how much should be allowed in our food and in the environ­ment and the extent to which some of these chemicals might be affecting wildlife.

What is the greatest honour you have received in your career?

I do not consider any of my research awards to be honours, but if I had to choose something it is being asked to be on the committee of the J.B. Johnston Club, the only international orga­nization focusing exclusively on how brains vary among different animals.

How important are students to your research endeavours?

Students are critically important to my research at a number of levels. First, they provide much needed technical assistance in my lab on several different projects. I can honestly say that I would not have been able to complete the bulk of my research without student help.

Second, when students are really interested in the topic they are researching, they often bring new perspectives and ideas to my research, which aid immensely in designing new experiments and writing papers.

Third, students that I train are often afforded the oppor­tunity to travel to present their research at regional and inter­national meetings. This greatly benefits the students because they can meet potential graduate or post-doctoral supervisors as well as present their work to the scientific community. It is also critical to my research because it fosters collaborations with other researchers, advertises the expertise of my lab and encour­ages other students to come and work with me.

If you had unlimited funds, which areas of re­search would you invest?

Application based research, such as prevention and treatment of various health problems, is entirely dependent on basic re­search. Most major discoveries in science occurred because of ser­endipitous findings in research labs addressing fundamental questions in science. I would therefore allocate far more fund­ing and flexibility to productive scientists who are trying to gain a better understanding of how the world works.

For a look at the entire catalog of 5 Questions features, check out the Office of Research and Innova­tion Services website.