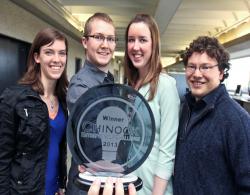 Not every third-year neuroscience student at the University of Lethbridge has a patent lawyer on speed dial – but Isaac Ward does.

As the CEO of Synbiologica Inc., Ward and his team (chemistry and biochemistry masters students Mackenzie Coatham (BSc ’12) and Harland Brandon, and first-year biochemistry student Erin Kelly) have developed a new method of detecting hormones, and are in the process of patenting their idea. Their proposed biomedical device technology is expected to bring next-generation hormone detection to the research, agriculture and medical markets.

Their idea and business plan recently landed them $10,000 as the first-place winners in the 2013 South Venture Business Plan Competition, and they are now looking to the next phase of the challenge – a trip to Edmonton in April to face off in the provincial arena, with even more money and networking opportunities on the table.

While he has to be a bit cautious about revealing details because of the patent process (an expected six to eight-month timeline), Ward says their idea will significantly improve the way in which hormones are detected.

“Hormones, and hormone imbalances, play very important roles in understanding behaviour and mental health, pregnancy, as well as development and aging of all populations,” says Ward. “We are pursuing new technology for the detection of hormones that provides rapid results that are 93 per cent more cost effective than traditional antibody technology.”

The team’s market analysis shows diverse applications and projections for growth, with a
two to three-year timeline to produce a marketable device. The first test runs of this device will occur this summer at the Canadian Centre for Behavioural Neuroscience in collaboration with neuroscience researcher Dr. Gerlinde Metz.

Ward says the team came up with the idea to develop the company and the new biomedical device by using the skills they learned through the iGEM (International Genetically Engineered Machine) program.

“The internationally competitive program allows undergraduate students to gain hands-on experience in science,” says Ward. “iGEM is run out of a student-operated lab provided by the Department of Chemistry and Biochemistry here at the University of Lethbridge and co-ordinated by Dr. HJ Wieden. We have been encouraged at every turn by our professors and others to move this idea forward, especially by the people at Alberta Innovates Technology Futures (AITF) who promote entrepreneurial engagement from scientific innovation.”

Ward says the group will not just run off into the biomedical business world once the ink is dry on their patent documents – they need to finish school first. “Education is one of the team’s top values and we will be working on this business while we complete our degrees. This is a learning process that will, we hope, carry us far beyond the classroom, and we are very pleased to have received the South Venture prize, because otherwise it would not be possible for our company to pursue funding opportunities and further develop our project.”