Goyal Recognized with Cade Award as Student of the Year 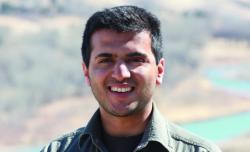 A student with high aspirations has received an award to match.

Goyal moved to Lethbridge from Victoria for his university studies and has been truly amazed by the opportunities provided at the U of L.

“For an undergraduate student, getting the opportunity to work under a professor in first year is simply magnificent. It has been a great experience having done research under Dr. HJ Wieden, Dr. Robert Laird and Dr. Olga Kovalchuk,” says Goyal.

He has set his sights on medical school, and is working his way toward that goal by engaging in a combination of academic and community service activities that he hopes will take him far.

“I look forward to attending medical school with a long-term goal of joining an organization like Doctors Without Borders,” he says. “It is far more than a dream for me to one day become a part of an experience like that – it is my passion, dedication and ambition.”

Goyal recently organized the Relay for Life Star with the Canadian Cancer Society. He also volunteers under Dr. Surendar Kilam and Dr. Ryan McColl at the Chinook Regional Hospital, and is a crucial part of the award-winning
International Genetically Engineered Machines (iGEM) team here on campus. The iGEM team ranked as one of the top four teams at the Americas Competition and as the top Canadian team internationally, all based on its efforts to build a bacterium that could consume oil sands tailings pond residue.

Psychology of Pregnancy and Birth: New ways for Treatment and Prevention