History of the CCBN Facility 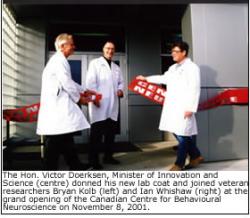 In 2001, the Canadian Centre for Behavioural Neuroscience (CCBN) was housed in a 60,000 square foot world-class research facility. At its inception, it held only 6 principal investigators and one industrial partner, NeuroInvestigations, Inc. Since that time it has undergone 2 expansions. The initial expansion completed only a couple years after opening, features two magnetic resonance imaging (MRI) units, one unit is used for small animal neuroscience research, while the other is used for human neuroscience research. The most recent expansion of the original building (2007) supports the Lethbridge Brain Dynamics group. The CCBN moved to the Science Commons in 2019.