The construction of a new Library provided a new front entrance to the campus. From the 1993 plan, the proposal for drop-off access and parking within a facility adjacent to the Theatre and Recital Hall in the Centre for the Arts and proposed south hall wing for expansion of the Sciences had not yet been realized and at the time of the 2000 report was viewed 'unlikely to proceed'. In light of this, the current entrance scheme continues to reinforce the important role of the library building entrance as a central gateway or heart of campus.

The City of Lethbridge also wished to confine campus access points to the three existing locations, namely the most southerly Parkway, Aperture and Valley Roads to coordinate with city infrastructure and traffic control plans.

Development for new academic facilities was proposed to utilize the West Lot car park. An adjoining Conference Centre and a new Theatre/Art Gallery with a below grade connection to the Gymnasium and existing pedestrain spine of the campus was proposed. 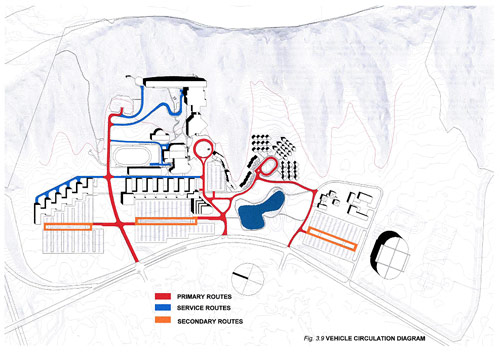