Following their review of the campus Development Plan in 1993, the University commissioned John Andrews International Pty. Limited to return to complete a new Master Plan Report to guide development of the campus into the new millenium during a particularly difficult financial climate for the University.

The planning review involved reviewing the work they completed in 1993, a site visit and a number of meetings with University representatives and architects working on current projects. The updated 2000 plan report was offered as guidance for the immediate and future development of the campus and was believed to be a 'working document' for the University.

This Master Plan Report embeds the assumption that 'future funding for building projects at the University of Lethbridge will be limited' and that a single storey building expansion solution on the flat plateau (based generically on Anderson Hall) is the 'most appropriate model' for future development. Hence, previously proposed multi-storey building expansion identified in 1969 and subsequently in 1993 were viewed as 'unlikely to proceed' in those proposed locations. 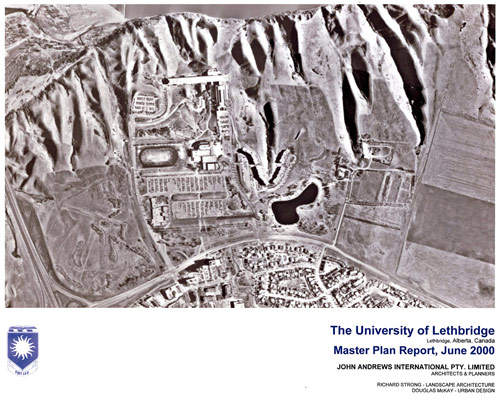 The Master Plan Report of 2000 represented a departure from a comprehensive formal approach to campus planning toward a precinct concept, whereby the campus is divided into distinct planning areas.

The report acknowledges the following departures from development plans up to 1993 (pp. 1.1):

The development of precint areas was concieved to provide conceptual Design Guidelines for each new project as funding became available within the precinct the project was located. Much of this thought was not carried through due to the replacement of the (2000) Master Plan Report the following year by the Brook McIlroy plan of 2001.