More elaborate and less geometric forms disturb the quiet counterbalance between the land and the buildings.

The academic space is contained in a linear multi-storey building crossing the two coulees that penetrate the central campus. The multi-storey space is built into the coulees rather than up, so that the building mass remains low on the landscape.

The primary objective is the achievement of an uninterrupted roof line, a strong horizontal, which by its very flatness contrasts with, and enhances the richness of contour of the coulees.

Since a great variety of spaces will probably be reflected in the facade of this structure, the strong horizontal of the roof parapet is needed to express the boldness demanded by the open site.

Residences are domestic in nature and should achieve a certain intimacy of scale in contrast with the academic space. The first of these, placed at the base of the building, look into and step down the coulee, to achieve this intimacy of outlook and scale.

As a collecting point in the university and the centre of student life, the University Centre has been massed into a single concentric building. The conical form reflects the angle of slope of the coulees, and suggests mass as against the linear aspect of the academic building.

The Recreation Complex was contained within a similar form, since it was found that these forms were harmonious to one another and the landscape. More elaborate and less geometric forms disturb the quiet counterbalance between the land and the buildings.

The task is to contain a variety of functions within a single building complex that relates to the existing forms of the campus. The conical form was adopted, but opened to the coulee which ran into its centre space. If becomes another earth mass, at the head of a coulee, and inside a protected courtyard containing part of the coulee is surrounded by shops and apartments. 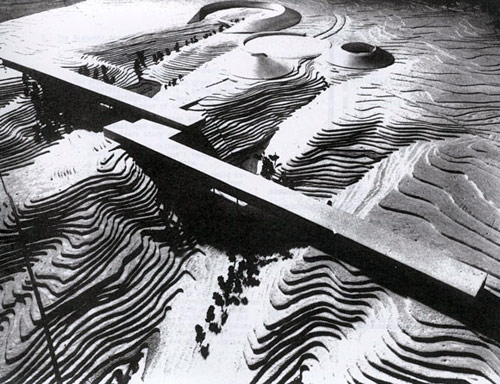