The University of Lethbridge site is located on the west bank of the Oldman River. The plateau area at its approaches from University Drive falls to the river in a distinctive landscape of undulating and denuded coulees.

The Erickson / Massey Plan of 1969 located parking areas, playing fields and ovals and associated indoor facilities in the western plateau area with central facilities (library, student union building and administration) extending from the arrival plateau down a ridge between two coulee formations to the northa dn south wings of academic facilities (arts, science, etc.) which bridged across the coulees in viaduct form at the bottom of the central facilities spine. The north wing was to accommodate Social Sciences and Humanities and the south, Physical and Life Sciences.

Student residences were formed in a crescent on the plateau at the head of one of the coulee formations and additional housing was integrated underneath the viaducts of academic facilities bridging across the lower slopes of the coulees.

University Hall, the northern 'viaduct' of academic and residential facilities, parking areas and sporting facilities are the only elements of the University which have closely followed the very formal 1969 Campus Plan. 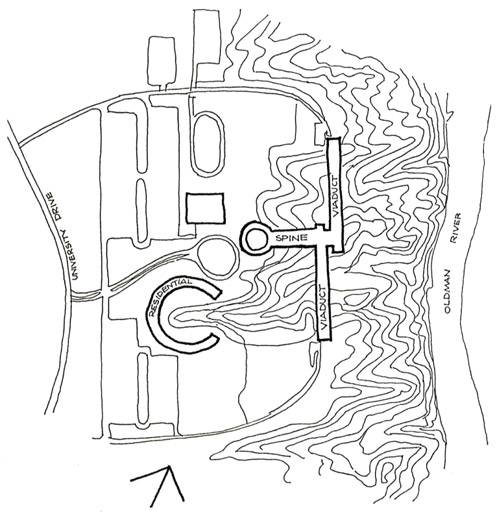 Nevertheless, the 1969 Plan has provided a framework to the subsequent development of the University while accommodating a number of departures:

The facilities of the University of Lethbridge are thus not organised in a coherent central spinal and academic wing grouping. The inadequacies of the structure of completed buildings on the coulee areas of the campus also necessitate that a reassessment of constructional approach as well as location of facilities is imperative in future development of the University of Lethbridge. 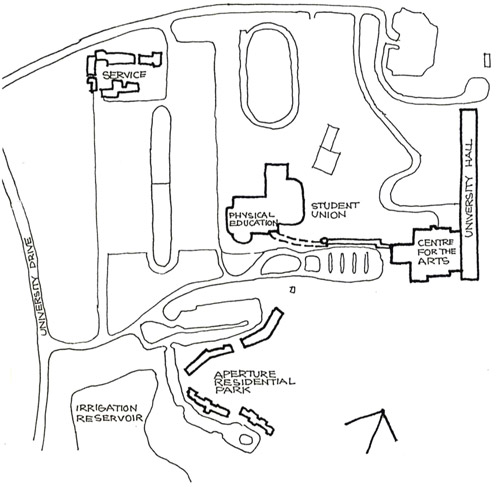