Following the Master Plan Report of 2000, in the subsequent year a Core Campus Expansion Plan (2001) was prepared by Brook McIlroy Planning + Urban Design from May 2001 over a period of several months, during the academic summer break, and finalized in the fall semester by November, 2001. The process followed a rational or comprehensive planning model with much higher emphasis on group consultation from senior adminstration, staff, student representatives and public engagement.

Prepared in urgency to the previous process devised in the Master Plan Report (2000), the scope of the new plan focused specifically on the core academic areas (or precinct) of campus. As such, the CCEP is both an academic and administrative space identification report as well as a land use plan, identifying the types and amounts of space required to accommodate anticipated growth of the campus over a period of five years, approximately until 2006.

The plan was achieved through a participatory process involving two public open houses, workshops with the planning steering committee and Board of Governors, consultation with Deans and community stake holders including the City of Lethbridge. The effort produced a web site which recieved 11,000 visits from July through October 2001. 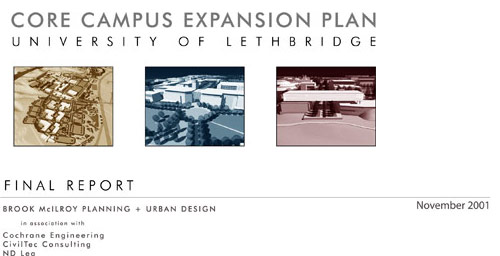 This particular planning exercise was generally limited to the core academic area of campus. Predecessory plans developed between 1990 and 2000, including the short-lived plan for precinct developments since 2000, were largely compiled and incorporated into the new 2001 plan primarily to update graphical plans for clarity and to provide an inclusive reference in a total land use plan. It is therefore the most integrated master plan vision currently in force, but admittedly not a singular 'vision'. In any case, previous planning work contained various strategems and guidance well beyond Brook McIlroy's immediate planning scope of the main core area.

The original Development Plan was acknowledged in the 2001 plan as the most influencial and foundational part of our institution's development history. All plans after 1993, however, appear to struggle with maintaining the provacative vision and fundamental concepts of the original Development Report of 1969 (which has still recieved the greatest investment in terms of relative capital and resources) and absolute pragmatism in the face of changing patterns of constraints and values.

Therefore, the Core Campus Expansion Plan is the most inclusive planning document in force and the most appropriate point of departure for the enhancement of the University Campus Master Plan in 2011.