Generally,university facilities should be organized so that a maximum walking time of 10 minutes for students between lectures and research in common facilities (such as libraries and lecture theatres) and specialized academic areas (such as laboratories, tutorial rooms and studios) is not exceeded. The 10 minutes walking time relates to 1/4 mile or approximately 400 meters. University Hall, the Centre for the Arts, the Student Union and the Regional Aquatic Centre are located within a diameter of this length and considerable opportunity exists for expansion of facilities within this limitation, particularly if common facilities are consolidated as a central spine. Should this occur, scope exists for the extension of common facilities to the west. The Aperture Residential Park to the south-west, parking areas to the west and athletic fields to the north-west would all be located within 10 minutes walking time to the core of common facilities of the campus. 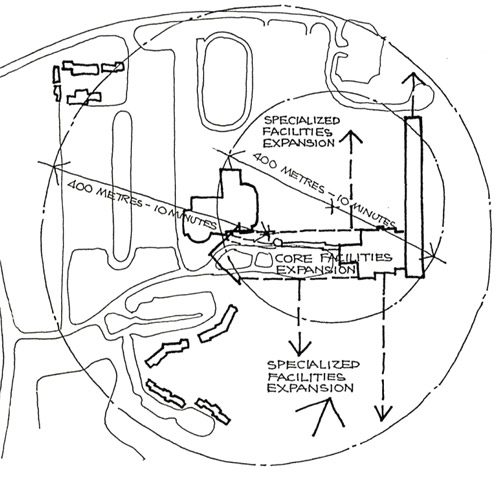 Teaching and research facilities of the University are organized around pedestrian circulation spines establies at Level 9 (a tunnel from the Student Union Building linking with the Centre for the Arts) and at Level 6 (University Hall). These connect within the Centre for the Arts by stairs and by one hydraulic elevator which continue to the Level 5 foyer of the Theatre Complex. However, two adjoining elevators and an unused elevator shaft terminate at Level 8, all of which could serve the Level 9 walkway by extending the lift shafts by one storey and relocating the elevator motor room above.

Access to the Theatre Complex, being located well within a 400 metre / 10 minutes walking time from all areas of University Hall, the Centre for the Arts, the Student Union and Physical Education Buildings, would be greatly improved by such increased elevator service at comparatively small cost. 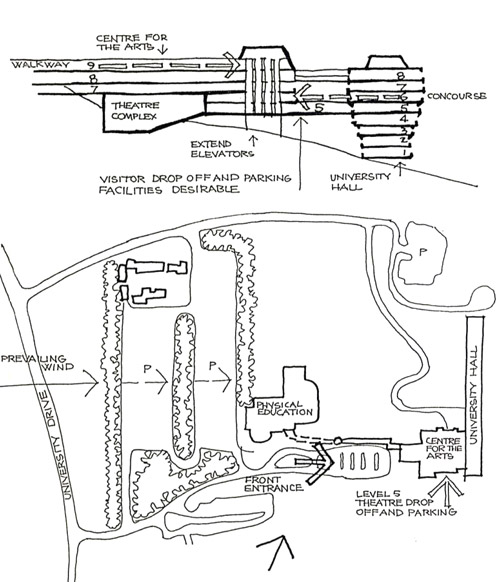 Major deficiencies of existing roads and parking facilities are the lack of an obvious front entrance for visitors and no provision for drop-off and parking adjacent to the Theatre Complex. Due to site gradients, the latter can only be addressed by an elevated structure at Level 5, directly to the south of the foyer at that level. The former needs to be resolved in any future consolidation fo the common facilities spine betweenthe Centre for the Arts and the Student Union Building.

Provision of parking structures will have to be considered as student numbers increase from current projections since all available western plateau area within reasonable walking distance has already been utilized.

A problem of the existing western carparks is their exposure to prevailing west south-westerly winds which can be mitigated by further planting of canopy trees in buffers between rows fo parked cars.

The entire campus of the University of Lethbridge is situated on very porous soil, the coulee areas towards the Oldman River being also very elastic. Any stormwater or irrigation seepage that enters building foundations could affect the bearing capacity of the soil, diminishing the degree fo friction required to support piled foundations.

It is understood that the structural problems which have developed with University Hall are mainly as a result of the extensive cut and fill that was required on the site during construction which has affected the elastic substratum of the coulee formation over which the building has been built.

With respect to the Centre for the Arts which is constructed on a ridge between coulees rather than across coulees as in the case of University Hall, foundation instability is understood to be attributable to extensive excavation into the ridge which , like the adjacent coulees, is also very elastic as a building foundation.

To avoid similar problems occurring in future development of the campus, geotechnical investigations of potential expansion sites should be completed. Stormwater runoff from the western plateua carparks and athletic fields needs to be diverted from the coulee area below. Further investigations of possible downhill seepage from the irrigation lake and the irrigation of the Devonian Park are needs to be undertaken. With new buildings, excavation into the flanks of coulees needs to be minimized together with piled foundations into the coulee gullies.

The outdoor safety of students has become a serious issue, particularly with the planting of shrubs which provide concealment of undesirable behaviour. Replanting of garden areas around the Aperture Residential Park and Devonian Park with indigenous low groundcovers and canopy trees such as cottonwoods is recommended.

The denuded coulee landscape of the University of Lethbridge is highly distinctive and any further planting in areas requiring wind or erosion control should be confined to indigenous species which do not require irrigation.