In planning for a new Library Information Network Centre (LINC) the University undertook the opportunity to review its long term campus development plan, originally conceived by Erickson/Massey in 1969.

In consultation with the Board of Governors Design Panel, the University elected John Andrews International Pty. Limited in 1993 to undertake a study of four major areas: 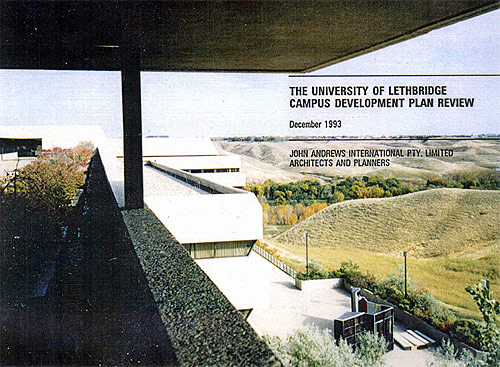 John Andrews is best known for his post-secondary work at Scarborough College in the mid-sixties as a contemporary of Erickson and as design architect for the CN Tower in Toronto, among several other notable academic buildings in the United States and abroad.

Following a ten-year fundraising campaign, the long-awaited Library Information Network Centre (LINC) was officially opened. It was the largest construction project on campus since University Hall.

More than $10 million was raised by close to 3,600 individuals, corporations and organizations, including the University of Lethbridge Students' Union. The largest single donation was $1.5 million.

In addition to housing the University Library and Security Services, the LINC building features study areas, breakout rooms, and Security Services. The library itself is one of the most technologically advanced and spacious libraries in North America. The room prefix for LINC is "L" and it has three floors (9, 10, 11).