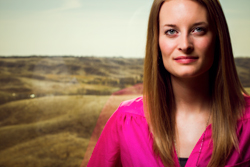 If ambition is the measure of success, then Kimberly Wikkerink is surely on her way to the top. As a University of Lethbridge undergraduate student majoring in computer science, Kim has already directed a U of L computer science club and completed a 16-month co-operative internship with SMART technologies.

Kim came to the U of L to be close to home and her friends, but soon discovered a passion for computer science. When she started, Kim was a general science major taking classes in math, physics and computer science. With a little encouragement from her professors and friends, she began to take more computer science classes and seriously considered it as her new major. One of her lab instructors, Arie Bomhof, was especially encouraging. “Out of this whole University, Arie knew who I was,” recalls Kim. “He specifically singled me out and said, ‘You are good at this, consider this as a direction.’ This might not have happened in a bigger university.”

Kim attributes much of her success to the encouragement of her professors at the U of L. “I always feel like my profs are engaged in what I am learning and they want me to do well. They want me to be successful. They work hard to do whatever it takes to make that happen as long as I am putting in the effort.”

Kim also believes that getting involved and making connections has led to some of her best experiences at the U of L. One of those connections is with mathematics and computer science professor Dr. Jacqueline Rice, who encouraged Kim to get involved with both LUMACS and the Co-operative Education program.

LUMACS - Life, U, Mathematics and Computer Science – is a program at the U of L dedicated to educating future generations about mathematics and computer science. Rice and academic assistant Nicole Wilson, as well as students including Kim, run this program. LUMACS gives middle school age students and their families the opportunity to explore math and computer science in exciting ways, including hands on activities like programming Lego robots. As the fall director in 2010, Kim planned the activities, organized supplies and worked directly with the students.

After her work with LUMACS went so well, Rice further encouraged Kim to join the Co-op Program. Soon after Kim applied, she received a 16-month co-op placement with SMART Technologies in Calgary. SMART Technologies is best known for SMART boards, interactive whiteboards which most schools are now using, but they also provide interactive business solutions.

Through her co-op Kim learned about the corporate atmosphere while receiving valuable work experience in her field. This experience included building installers for SMART software, keeping track of bugs and facilitating employee access to important work tools. “Co-ops are a great opportunity to see how what you’ve learned in school is used in the real world,” explains Kim, “I realized that there is a wealth of knowledge out there that I am just beginning to get into, which is terrifying and exciting at the same time.”

Kim says her favourite part of the co-op program is meeting new people and learning new things. She is currently looking into doing another co-op placement, so she can explore other career opportunities in computer science. When discussing her future Kim says, “computer science is a field that’s always changing, it never stays the same, and there is always so much new technology. It is really exciting and I want to be a part of it. I am looking forward to problem solving in the real world and actually applying what I have learned at the U of L.”

Apply for admission to uLethbridge today!