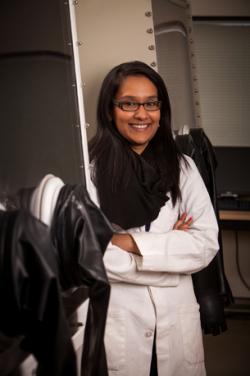 “The research lab is where everything came together for me. I began to see how I could have a career as a chemist.”

“I wasn’t sure what to expect,” Suduweli Kondage recalls. “In high school, your teachers still pretty much look after you. I was a bit worried that I wasn’t prepared enough and that I might not be able to handle university when I first started.”

Nerves aside, Suduweli Kondage says she had a couple of noteworthy things in her favour as a new high school graduate. For starters, she’d been accepted at the University of Lethbridge.

“I chose the U of L because of its size, and because it was in my hometown,” says Suduweli Kondage, who was born in Sri Lanka and lived in Lethbridge for about ten years. “The U of L is smaller than a lot of other universities, and I thought that would be a huge plus for my education.”

According to Suduweli Kondage, her instincts were right. She says the small class sizes at the University of Lethbridge did promote success. In fact, the notion that she’d be left to her own devices as a U of L student didn’t prove to be true.

“By the end of my degree all of the professors in the department knew me by name,” she says. “You develop personal relationships with professors at the U of L. They know you, and they’re always glad to help you any way they can.”

As for the second thing going her way, Suduweli Kondage says an early decision to study chemistry was a great one from the start. In the same way she was happy to discover that the U of L was a supportive learning environment, Suduweli Kondage was thrilled to learn that the opportunities in the chemistry department were quite beyond her expectations. Once her initial classes were completed, the doors to independent study, research and co-op placements opened widely to her.

“The research lab is where everything came together for me,” says Suduweli Kondage. “I began to see how I could have a career as a chemist. Working in the lab allowed me to develop my skills and discover the kind of research I was interested in.”

Suduweli Kondage completed four independent studies over the course of her program under the guidance of U of L chemistry professor Dr. René Boeré, and was chosen for an acclaimed 15-month co-op placement at NOVA Chemicals before completing her degree. Both experiences she describes as invaluable.

“I think both experiences are essential for a chemist,” says Suduweli Kondage. “An independent study gives you the freedom to explore what you’re interested in, and a co-op gives you experience in an industrial lab. You can’t overestimate the importance of that. It takes your skills to the next level and looks great on a résumé.”

Suduweli Kondage believes that the U of L’s focus on research made all the difference in propelling her studies forward, and is certain she wouldn’t have gained the kind of experience she did at any other university.

“The U of L recently was named the top undergrad research university in Canada,” she says, speaking of the 2012 RE$EARCH Infosource rankings. “That says a lot about the kind of opportunities students have at the U of L.”

After earning her degree, Suduweli Kondage accepted a position in the Environmental Sciences lab at Lethbridge College and began work in January 2013.

“I’m really excited to get started with my career,” says Suduweli Kondage. “My résumé is solid, thanks to all the great experience I was able to gain at the U of L. It shows all I have to offer.”

Find out how you can get involved in research at the University of Lethbridge.