Teaching: It's what we want to do. 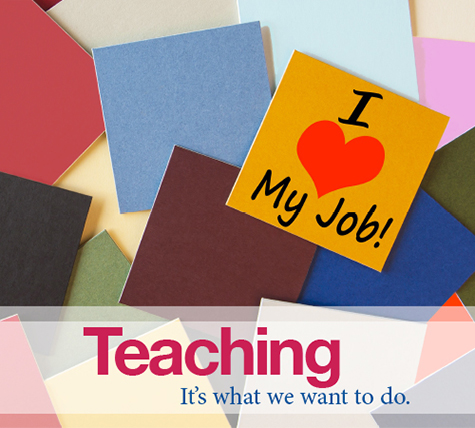 Teaching is exactly what we want to do, and we were surprised and gratified to receive recognition from students at the Last Lecture in April, when we three instructors were presented with the Teaching Excellence Award by the University of Lethbridge Students’ Union. Such an award coming from students, who after all are the focus of teaching, is as good as it gets. We felt this was an opportunity to point out how much we respect the efforts and talent we see in students. Here are a few thoughts on why we love this work.

During the first week of class, I try to guess to what extent the new cohort of students will be willing to think through tough concepts and read about facts and ideas that will trigger understanding, and what I could do to help make that happen. It’s not always clear how to attain the “eureka” moments. I try different approaches to help the process, because that is my job, and also because my goal is that they remember what they learned after the class is over.

I appreciate students because they are by definition interested, which is why just being around students is a solid-gold privilege. I try to see what interests them, and what leads them into investing time and energy beyond what would suffice. What usually happens in class is that after a slow start (due to their busy schedules and double-booked study time) they see where we are going and become partners in the process. When students feel they share control of where we will go, yet see how much new information and knowledge can be gained, the learning often really starts. It helps if they know that their efforts will be recognized. They sharpen their intellectual tools, and even forge new ones, to understand issues and develop ideas to meet real challenges. That’s part of the goodness in students, I think, that they not only want self-improvement, but they want to make a difference. When the spark turns to fire, that is when I appreciate being around students the most. I start to see them as my learning gurus – I can learn about learning from them.

I teach courses in environmental science, sustainability, the distribution and history of life, resources, data analysis, experimentation–topics in which current challenges seem to stream at us one after the other. The facts we need to consider are all over the map, but I am impressed by the way students take charge and invest effort. I help the process where I can, and get out of the way when I need to. We all gain new knowledge and skills best when we see the relevance and importance of the topic. (Will it make the world a better place? This is an entirely worthy goal even if it seems overused.) Students are right to want to feel they are improving, making progress, honing thinking skills, learning context, and acquiring methods. They also deserve to be partners in the unfolding course. To me, the best classes are the ones in which the students help form the learning process and interact with each other. Sometimes just giving them examples, asking them to think through the steps, covering the background, providing a conference atmosphere, and accepting them as collaborators does the trick. That’s when I try to see inside their thoughts and motivation, because not only do I want them to learn, I want to learn like they do.

Seriously, Google? Because that is not my experience at all. Of course there are days when I come back from class feeling frustrated by students. Of course there are times when I despair that they don’t understand what a deadline is. But for the most part, I marvel at how students get through their days with everything that is on their plate.

Like you, I have had e-mails from students that were written at 4 a.m., pleading for an extension or begging off class the next morning. For the most part, however, when I follow up I find out that they were called in to work an extra shift at their lousy minimum-wage job, and they were afraid to say no because they had been asking for extra shifts. Or that they were holding their roommate’s hand in the emergency room after a botched suicide attempt. There was the time that a student needed to bail their dad out of jail, and on the way their car broke down and then was hit from behind by a drunk driver. True stories, all.

It is so easy to forget that students have active, busy lives, and while they might take their studies very seriously, life gets in the way. Many of our students need to work outside of school, many have families to care for, many know that they need to volunteer so that their resumé will find its way to the top of the pile when they graduate. And for most of them, discovering what living on your own means—along with consequences suffered after making poor decisions—is as important as their class work. And while I think that the class I am teaching is the most important one, they have four other profs who feel the same way. The never-ending assignments, essays, presentations, and projects are what they signed up for, but to approach them all with care and attention is a super-human feat. It sounds so cliché to say that they inspire me, but seriously, they do. When was the last time I had that much energy?

Sheila McManus (History and Board of Governors’ Teaching Chair 2014-16):

Best. Job. Ever. This pretty much sums up how I feel about teaching. I also felt that way when I had the enormous honour of receiving one of the Distinguished Teaching Awards in April 2014, and delivering one of the Last Lectures back in April 2013, and again during Spring 2014 Convocation when I got to watch each and every one of the graduates walk across that stage. When Dan Johnson suggested that the three of us write something about how great we think students are, to counter some of the negative attitudes toward students that can sometimes prevail among university faculty, I jumped at the chance.

Really, what’s not to love about teaching our students? I am repeatedly amazed at how well they write, and how interesting and articulate they are during our many and lengthy in-class discussions. I have watched 90 first-year students debate the key theological and political features of the Protestant Reformation, and argue vehemently over the gains and losses of the English Industrial Revolution. I’ve watched 60 second-year students use Akira Kurosawa’s celebrated 1950 film Rashomon to explore notions of truth and evidence; assess whether historians are the drug dealers of nationalism (or, as one student recently re-phrased it, whether we buy a little too much of what we sell), and discuss how to use historically based films and video games to engage a wider public audience.

Maybe all those “bad” students I hear about are in other people’s classes? Is it just a matter of perspective? For example, I cringe every time I hear a prof use the word “kids” to describe our students. To me, that one word sums up a lot of what’s wrong with university education. It says right away that you see your students as inferior, lesser-than, immature, uninformed, the empty vessels into which we, the learned scholars, are to deposit our vast knowledge... To me that one word implies a deep lack of respect for who our students are as adults and learners. I happen to know a lot about one little thing—collectively, those “kids” know far more than I do about pretty much everything else. They are also working harder and contributing more to their communities than most of us did when we were their ages. Read the descriptions of the students who won medals during the 2014 Convocation ceremonies, and ask yourself how much volunteer work you did when you were a student or how many children you were raising during your first degree. Attend the annual Last Lecture sometime, and you will see the theatre packed with students attending an optional event during the last week of class, just to hear three talks that can range from serious to hilarious but are always thought-provoking. Teaching lets me meet these amazing people, with interesting and challenging lives, different perspectives, and completely new ways of perceiving material I thought I knew.

Like I said at the start: best job ever.

This workshop is a part of the GTA-PD Online Teaching series which provides training and support for graduate students...

GTAPD - Diversity, Equity, and Inclusion in the Classroom

This workshop is a part of the GTA-PD Online Teaching series which provides training and support for graduate students...