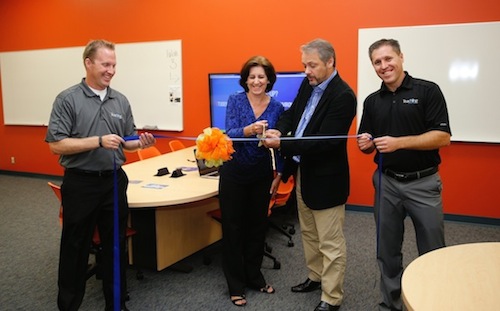 For a quick overview, you may also read the LEE article published in the 2014/2015 Teaching Centre magazine A Light on Teaching: So What Exactly Is SCALE-UP?

Physics education specifically has been shown to be more effective when students can interact with faculty, collaborate with peers, and actively engage with the material (see Beichner & Saul, 2003). SCALE-UP brings these benefits to a large-scale classroom. In SCALE-UP classrooms, students perform better on conceptual understanding as well as problem-solving skills (Beichner & Saul, 2003; Beichner, Saul, Allain, Deardorff, & Abbott, 2000). Students perform better than their peers in traditional classrooms 88% of the time, failure rates of female students in these science courses are cut in half, and those of visible minorities are cut by a factor of four (Beichner et al., 2000). Importantly, Beichner and colleagues (2000) report that there is an improvement in student attitudes towards (science) learning in the SCALE-UP classroom. The SCALE-UP room has been shown to eliminate the back-of-the-room phenomenon, according to which high achieving students sit in the front, and poor students in the back of the class (Miller Kregenow, Rogers, & Price, 2011). It is important to note that the SCALE-UP classroom goes hand in hand with a certain pedagogy. If classroom and pedagogy are mismatched, the success of SCALE-UP is minimal (Lasry, Charles, Whittaker, Dedic, & Rosenfield, 2013).

Technology is described as an organizer (Beichner et al., 2000), allowing for web-based aggregation of resources such as activities, calendars, syllabus, lab reports, and notes. This web-based problem set delivery is used in and outside of class. The interface used at NCSU is WebAssign. This style is used to encourage independent learning. Different software programs necessitated by the discipline are made available for students. Problems and questions are due in class, so that students can collaborate on them. This allows for the instructor or teaching assistant to move around and provide feedback or guidance as needed. It was found that students should be provided with laptops at the table, rather than desktop computers. This allows for the flexibility of eliminating sightlines when not all computers are in use (Beichner et al., 2000). Beichner describes student access to laptops as a “vital part of the classroom environment”. However, in later research, it was determined that one laptop per team of students (here three students) is sufficient (Beichner & Saul, 2003). Large whiteboards are usually mounted alongside the perimeter of the room. This allows individual groups or teams to access a workspace, while providing the instructor with an accessible view of students’ progress. More recently, monitors have also been used on the classroom walls (Beichner, 2008). This allows students to project their tables’ contents onto the wall for the whole group to see. The instructor can override student projection and display content on all monitors simultaneously for the entire class. The instructor also uses a wireless microphone if attention of the whole classroom is required.

After trial and error with different furniture types, Beichner et al. (2000) settled on round tables of 6- or 7-foot diameter, depending on space capacity of the room. These tables have proven efficient in allowing for a full group discussion among team members at the table and in providing enough space for students. The ideal room is described as square with an instructor station in the centre (Beichner et al., 2000). However, differently shaped rooms were also used in Beichner’s SCALE-UP research. Beichner and Saul (2003) describe that the SCALE-UP room was adopted from a typical restaurant layout: tables are round and chairs are comfortable. Each table sits three teams, which are labeled A, B, and C. Tables are further numbered, so each team can be easily identified (e.g., 4C = team C at table 4). This allows for splitting the room into thirds using team number, or in half using table number (odd/even).

Beichner and colleagues (2000) describe SCALE-UP as a way to create student neighbourhoods. Students commonly work in teams of three, but also engage in a larger group of nine. Roles are assigned within a team, but these roles are regularly rotated, so that each student has a chance to contribute in a different way and learn about teamsmanship. Group bonus marks are given out to those groups who perform better than a set minimum. Additional benefits to collaborative environments are that students (a) are more active through engagement with their peers, (b) have additional resources in their peers, and (c) learn from each other (Beichner & Saul, 2003). Beichner and colleagues have also adapted some guidelines for successful group-based instruction, which they report are crucial to its success. These include individual accountability, positive interdependence, opportunity for interaction, appropriate use of interpersonal skills, and regular self-assessment of group functioning. To avoid non-participation of high achievers (“I’m too good for this group, I do better on my own”) or slackers (“I’m not doing this, they can do the work”), additional checks are in place. Extra team points can be obtained if the group’s grade average on an exam is >80%. Poor performers can be fired from the group, and have to produce all the work on their own. Students also write contracts.

Beichner and colleagues (2000) elaborate on the types of materials used in SCALE-UP classrooms. They describe tangibles and ponderables. Tangibles are short, hands-on activities, whereas ponderables are interesting questions for consideration. These facilitate the GOAL problem solving protocol which SCALE-UP makes use of (Beichner et al., 2000; G = gather information, O = organize, A = write a plan of action, L = learn from your work [Polya, 1973]). In addition, group laboratory work is also conducted.

U of L SCALE-UP Room Pilot

After a successful Strategic Priorities Funding Request to the University of Lethbridge, A SCALE-UP room was built in the summer of 2014. To build this room, an existing Anderson Hall classroom AH177 was retrofitted.The room capacity at present is 40 students. Two spare chairs are intended for an instructor or teaching assistant.

The Teaching Centre Educational Facilitators are happy to help anyone interested in redesigning his/her course to fit the original SCALE-UP model. However, we welcome faculty to use the room for any of their adatped active learning methods. This room works for a multitude of teaching styles, and can be used as such. A recent internal LEE study has revealed that the learning environment still impacts course outcomes even when we take out the UP in SCALE-UP. That is, you don't need to flip your course to be able to teach in this room and see successful results. Disclaimer: If your course is direct instruction (lecture, presentation) only, we encourage you to consider a room with a front of room/central focal point. 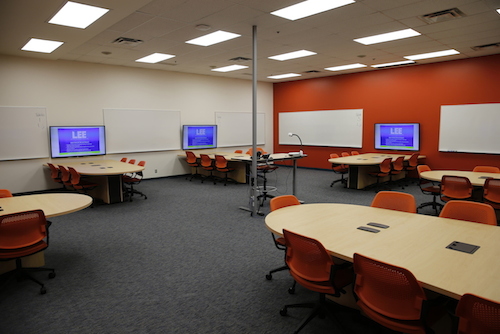 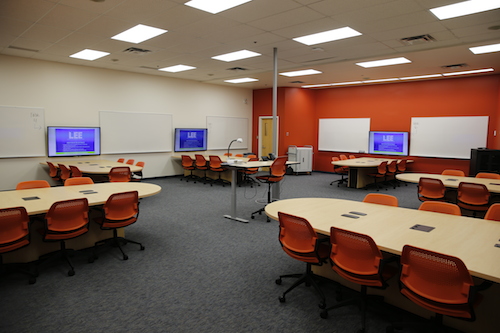 1. What is SCALE-UP? In a nutshell:
http://www.ncsu.edu/per/scaleup.html

3. Beichner, 2008. The SCALE-UP Project: A Student-Centered, Active Learning Environment for Undergraduate Programs. An invited white paper for the National Academy of Sciences.
http://physics.ucf.edu/~bindell/PHY%202049%20SCALE-UP%20Fall%202011/Beic...