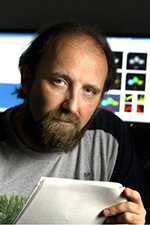 While Dr. Nicolelis is best known for his achievements in developing Brain Machine Interfaces (BMI) and neuroprosthetics in human patients and non-human primates, he has also developed an integrative approach to studying neurological and psychiatric disorders including Parkinson’s disease, epilepsy, schizophrenia and attention deficit disorder. Dr. Nicolelis believes that this approach will allow the integration of molecular, cellular, systems, and behavioral data in the same animal, producing a more complete understanding of the nature of the neurophysiological alterations associated with these disorders.

Dr. Nicolelis is a member of the French and Brazilian Academies of Science and has authored nearly 200 manuscripts, edited numerous books and special journal publications, and holds three US patents.

Enjoy Dr. Nicolelis's talk from the 2012 TEDMED conference below:

Can we move beyond the machine-brain barrier?