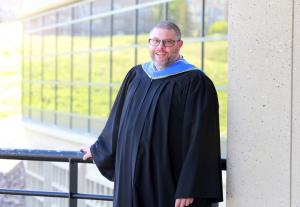 Brendan Cummins received his Master of Arts degree in 2018 and is currently an instructor in the School of Liberal Education. He first attended the University of Lethbridge in 1989, fresh out of high school and barely 17 years old. “When I first started here I was away from home for the first time,” says Cummins (BA ’16). “I had a really good time but didn’t go to class. I stumbled through my first semester and went on academic probation, so I was required to withdraw in the spring of 1990.”

After spending some time overseas, Cummins returned to Alberta and enrolled at Red Deer College. He got involved in student politics and journalism and continued to enjoy the student lifestyle, however, studying remained a low priority.

“I walked away from formal education for a long time. I really didn’t think it was for me,” he says. “I was going to school because I was told to go to school by my parents, guidance counsellors and teachers. Because I had been really good at school without having to do any work, I didn’t realize there was work involved in university.”

Over the next 14 years, Cummins completed a radio and television diploma at the Northern Alberta Institute of Technology, got married, became a parent, got divorced, worked in radio for a time and as a cook in bars and restaurants. He moved back to Lethbridge in 2005 and his soon-to-be second wife encouraged him to think about going back to university. A year later, he started chipping away at a Bachelor of Arts, majoring in history, while working as a furnaceman at Lethbridge Ironworks.