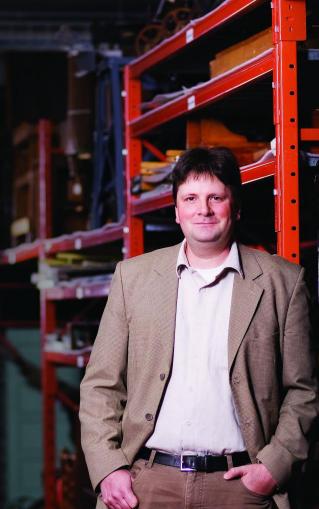 Dr. Christopher Epplett teaches in the History Department at the University of Lethbridge and has a broad number of research interests that include ancient military and social history, particularly that of the Hellenistic world and the later Roman Empire.

He is not, however, always thinking of the past. Chris
believes the study of the ancients is one way of understanding contemporary situations and events. His work with the Galt Museum & Archives, for example, helps him keep an eye to the future.

Chris believes that knowledge of local history can help a community move forward in a direction that’s consistent with the direction it has chosen in the past. “I have an interest in local history even though it’s not my specialty,” Chris says, “it’s essential for a community to keep in touch with its roots, to understand where it came from.” Awareness of all the
accomplishments of citizens in the past builds pride and a sense of community.

At the Galt Museum & Archives, Chris helps develop upcoming exhibits, such as the Medieval and Egyptian exhibits in 2008, strategies for fundraising, and ways to increase awareness of the Galt in the community and at various levels of government. He assists in ensuring that the Galt has a broad appeal for all members of the community.

Since January 2008, Chris has also served as chair of the Galt’s Cultural History Collection Committee, which works with the curator to set policy decisions related to acquisition, storage, and de-accession of artifacts. The committee makes policy decisions
history after considering future exhibits at the Galt, as well as complementary exhibits at other museums, and then brings a plan back to the board.

Lucelle Prindle, chair of the Galt’s board, feels
it is beneficial to both the museum and the U of L to have faculty members like Chris on the board. They bring “valuable expertise and insight,” Lucelle says, and the museum provides “opportunities for students to gain experience by working in the archives and exhibits of the museum.”

As a teacher and a researcher, Chris believes it is important to support and to play an active role in the community. “I think it’s the responsibility of the university,” he notes, “to ensure that its programmes and its graduates are well-prepared to serve the community and perform a useful function. Those who study history and have a good grasp of it are better-rounded citizens.”

Currently, Chris is collecting material for a book on the Roman military frontier in Germany during the early empire. He is also studying military forts constructed east of the Rhine during the occupation under Augustus. These forts didn’t last very long, and one aim of his research is to see if occupation and fortification strategies employed at the time contributed to the defeat of the Romans in that region.

Chris’s particular interest is in spectacles, such as gladiatorial combats. He wrote his dissertation on the Roman beast-hunts and is currently preparing a manuscript on the hunts and exotic animal spectacles that were popular in the Roman Empire. These started as the parading of animals, such as elephants, captured in warfare during the Roman Empire expansion of the empire.

Over time, the spectacles became more violent and more complex. Many included elaborate settings and machinery, such as elevators and trap doors, to deliver the animals to the arena floor in order to surprise other combatants and to delight spectators. The most popular events were combats between different types of animals or between humans and animals in arenas such as the Colosseum in Rome.

Some popular events were based on mythological stories. For example, Chris says there are records of a criminal sent into the arena representing Orpheus, a figure from Greek mythology who could tame any animal with music. He was initially surrounded by relatively harmless animals, until a bear was released. The condemned man was torn apart, to the delight of the bloodthirsty audience.

Writings, vases, mosaics, and coins show that beast-hunts included any exotic animals the Romans could get their hands on. Bears and bulls were readily available throughout the empire. Other animals included lions, elephants, tigers, giraffes, rhinoceroses and, in aquatic spectacles, hippopotami and crocodiles.

Chris explains that these spectacles served important symbolic roles, showing Rome’s control over the known world, advertising territories that were added to the Roman state, and demonstrating the power of the empire and the emperor. “They were examples of how humans try to dominate the environment symbolically, if not literally,” he notes.

As one of a handful of historians studying beast-hunts, Chris has participated in a popular documentary on the Roman spectacles, Beastly Games, a program that is periodically shown on the History Channel. He is also one of six experts interviewed for a two-hour documentary on animal spectacles that will air on Animal Planet later this year.

“One of the points we discuss in the documentary is our continuing fascination with violence,” he explains. “Certainly we don’t have spectacles in which thousands of animals are killed in a relatively short space of time, [but] we still have violent animal spectacles on a much smaller scale.”Such contests involve a variety of animals, including bulls, dogs, and even roosters.

Motivated by his passion for history and his sense of duty to educate the local and broader community, Chris enjoys finding and fitting together pieces of the historical puzzle.

In Southern Alberta, a long way and time from the Roman Empire, Chris is gaining recognition internationally for his research, and contributing to the cultural well-being of the university and Southern Alberta.

Security in the Gulf: Local Militaries before British Withdrawal

Join history professor, Dr. Chris Burton , as he explores Identity and the Russian Invasion of Ukraine The Russian invasion...