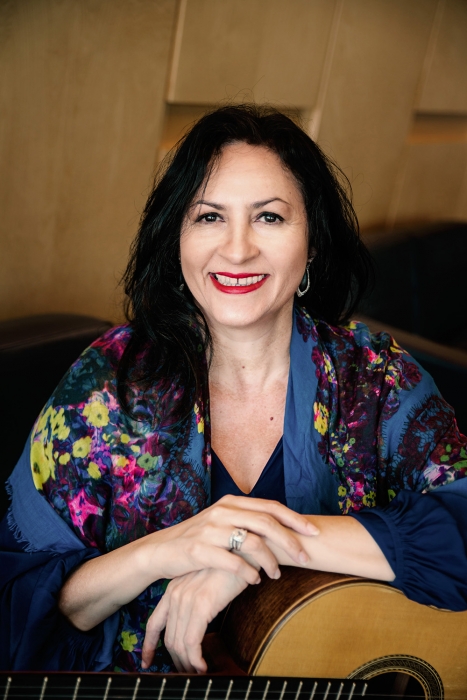 Hailed by the critics as “The guitar guru” (E-Veritas. University of Miami) “the powerful and intense style of Iliana Matos" (Classical Guitar Magazine) has made possible an extraordinary career, following the tradition of María Luisa Anido, who, when hearing Iliana play, wrote: “I am impressed by your wonderful guitaristic art, and I am proud to know that a woman (and a Cuban woman!) came to such a degree of artistic perfection.”

Her highly acclaimed GSP CD “Angels in The Street” has earned universal acclaim from critics, placing her among the elite of today's classical guitarists: “Her name deserves to go down in guitar history as one of the great players of our time" (Classical Guitar Magazine); "a match-made-in-heaven recording that is about as perfect as guitar records get... she simply, radiantly shines, a virtuoso in service to the music" (American Record Guide); "she has sufficient of all credentials necessary to take her place in the annals of guitar as one of its truly gifted and outstanding exponents" (Musicweb-international.com); "it's impossible while listening to 'Angels' to believe that her name will not someday ring the same peal of recognition as does Bream and Williams" (Minor7th.com).

She was included in the Dictionary of the Spanish and Latin American Music, SGAE and Supplement of the Encyclopedia of the Guitar, and her CD “Angels in the Street” was listed in the “Guitar’s TOP 100" written by the Canadian musicologist Enrique Robichaud.

Living in Spain for the past 20 years, she has contributed to the development of a new generation of Spanish guitarists while teaching at the Conservatory of the Balearics, the Conservatory of Salamanca and the Royal Music Conservatory of Madrid. In addition to this, she regularly gives masterclasses all over the world and has performed extensively throughout Latin American, North America, Europe, Africa, Asia and the Middle East. Currently, Mrs. Matos serves on the Faculty of Fine Arts at the University of Lethbridge.

Over the past three decades, Iliana Matos has established herself as one of the world´s preeminent classical guitarists. As part of her world tour "Celebrating 30th Anniversary as a Performer" in 2016, Cuban virtuoso Iliana Matos completed a tour of 19 cities in China, including a concert at the Shenyang International Guitar Festival. North American tour have included concerts in 23 cities, being featured by prestigious universities, guitar societies and festivals. In Mexico, she completed a tour of 7 cities, including concert and masterclass at the International Guitar Festival organized by the Conservatory National of Mexico.