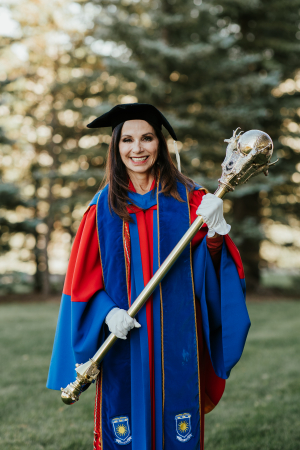 The University of Lethbridge mace was dedicated for use at Fall Convocation on October 1, 1988. It was financed from a memorial fund established to recognize Virginia Mitchell, a former University senator who lost her life in an automobile accident.

Created by sculptor and artist Corne Martens, the mace is cast in bronze and weighs about eight kilograms. The mace signifies the authority of the Faculties and Schools of the University to grant academic degrees, diplomas and certificates; of the Senate to grant honorary degrees; and of the chancellor to confer degrees, diplomas and certificates.

During the academic procession and recession, the mace is carried by the chief marshal. The chief marshal is appointed from among the members of the University of Lethbridge academic staff by the president and vice-chancellor.

The mace is also symbolic as it relates to the University of Lethbridge. One end features three elements—mortarboard, gavel and open book. The mortarboard represents the Senate and symbolizes academia with all of its connotations. The gavel represents the Board of Governors and symbolizes management and control, while the open book represents the General Faculties Council and symbolizes teaching, scholarly activity and service. The other end of the mace features a globe set in pronghorn antelope antlers. These represent the mascot of the University and our commitment to the physical dimensions of the scholar. The globe symbolizes the universality of knowledge and liberal education in all its dimensions.