Coat of Arms and Shield 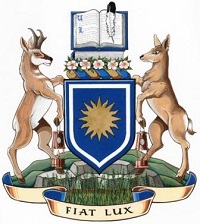 The Coat of Arms

The coat of arms features a blue shield with white edging and the University’s signature sun in the centre, representing intellectual enlightenment. The eagle feather and the Alberta wild rose on the crest above denote the University’s location on traditional Blackfoot land in southern Alberta, while the books are enduring symbols of education.

The shield and crest are flanked on the left by a pronghorn, representing the University’s athletic teams, and on the right by a mule deer, a native inhabitant of the area. Together, they also represent the men and women who make up the University community. The coulee landscape and rough fescue (the official grass of Alberta) are characteristic of southern Alberta, and the sun-grass animal connection represents the flow of energy that supports all life and reminds us of our own connection with the landscape. The rock below the shield recalls the name “Medicine Rock” (Nato’okotok) bestowed on the University by Blackfoot Elder Bruce Wolf Child in 2002. It also alludes to glacial erratics, large rocks deposited in the area when the glaciers receded.The miner’s lantern, an artifact of the early history of Lethbridge, recalls the idea of the illumination of knowledge and symbolizes the achievements of the more than 35,000 University of Lethbridge alumni. The University’s motto Fiat Lux (Let there be light) appears at the bottom of the coat of arms.

The University of Lethbridge shield was designed primarily in the University’s colours of blue and gold. The gold sun on the blue shield represents southern Alberta. The University’s motto, ‘Fiat Lux,’ the Latin for ‘Let there be light,’ is lettered on a gold and silver band below the shield.