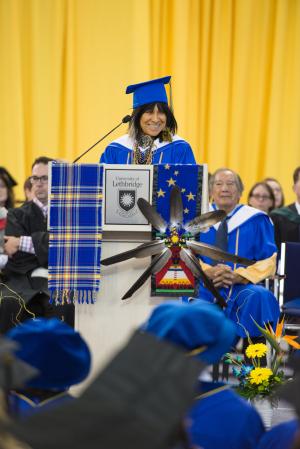 Honorary degrees are awarded by the University of Lethbridge Senate under the power conferred upon this body by the Post-secondary Learning Act of the Province of Alberta.

Recipients of these degrees personify the values expressed in the philosophy of the institution – they cultivate humane values and seek to foster such things as intellectual growth, social development, aesthetic sensitivity, personal ethics and the dimensions of a scholar's personality.

Individuals who are honoured have made substantial contributions to society at the provincial, national and/or international levels in such areas as the professions, business, public life, philanthropy, the arts, humanities and the sciences. People in all fields of endeavour are eligible and the recipients need not be in prominent positions – the distinguishing feature is that they will have given distinguished public service within the scope available to them.