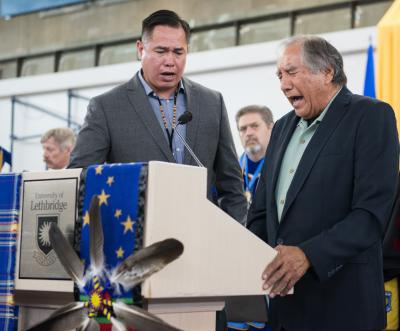 Our University of Lethbridge convocation is steeped in academic ceremonial tradition. Convocation, from the Latin convocatio (a calling together), refers to an academic assembly summoned by the chancellor. The earliest convocations in Britain were ecclesiastical assemblies whose origins can be traced back to a time before the Norman conquest in 1066.

The first convocation of the University of Lethbridge was held on May 18, 1968 in Southminster United Church. It included the installation of both Chancellor L.S. Turcotte, and President and Vice-Chancellor W.A.S. Smith. During the next five years, convocation was held in various city churches and once in the Exhibition Pavilion. The ceremony was moved to the Physical Education Building in 1972 and has been held on campus ever since.