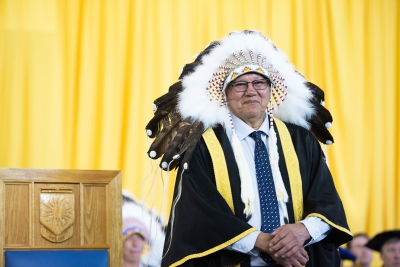 Chancellor of the University of Lethbridge, Charles Weaselhead

The first university chancellor per se was appointed at Oxford in 1214 by the royal sovereign. The chancellor had the power to imprison, fine or excommunicate offenders for virtually any crime except ‘murder and mayhem.’ He could expel undesirables to a distance of 10 miles from the town, deprive masters of their authority to lecture and expel students, preventing their graduation. These powers were essential in the 13th century as rioting between students and townsfolk had become commonplace and the tensions between ‘town and gown’ prompted the establishment of the first university residences and later the halls of learning themselves.

From Oxford to Lethbridge, the crucial role of favourable ‘town and gown relations’ continues to preoccupy university chancellors. At the University of Lethbridge, the chancellor is both ‘of the community’ and ‘in the community’ of southern Alberta. The chancellor’s powers, as articulated in the Post-secondary Learning Act, are somewhat more circumscribed than they were in medieval England! Nevertheless, the chancellor functions as chair of the University Senate, is the ultimate authority for the conferral of academic and honorary degrees, and presides over all University convocations.