Want to study one of the most interesting languages in the world? Something different, challenging and COOL? Fascinated by all things Japanese? Absolutely love the geeky cool factor of Manga, Anime, Ninja, Otaku, Karaoke, Video Games, CosPlay, Martial Arts, J-Pop and J-drama? Or are you into Japanese culture, film, business, literature and history? Then you are a perfect candidate for Japanese language classes!

People think that Japanese is an uncommonly spoken language. Nothing could be further from the truth. Japan is a significant player on the world scene.

Beyond these are all the benefits of studying Japanese such as:

What will I learn in a Japanese language class?

We focus on all four skills; how to speak, read, write (hiragana, katakana, and kanji) and listen. This learning is layered with learning how to act socially and linguistically appropriately such as learning how to: bow, address people with the right title or use appropriate levels of speech (casual, polite, honorific) etc. Ultimately, the goal is for students to be able to engage in conversation and communicate in situations that occur in daily life.

How does Japanese fit into my major?

What courses make up the minor in Japanese?

We offer five language classes and a handful of society and culture classes:

How does the minor work? 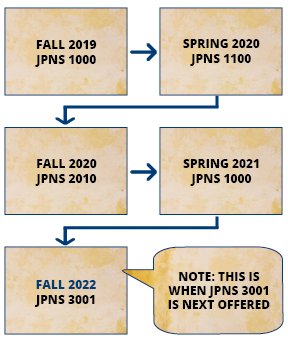 Are there any study abroad opportunities?

Absolutely! There are currently several opportunities to study in Japan. These programs are set up and handled by the International Centre. For more information on all of these locations, click the links below, or visit the International Centre’s website or contact Gizelle Tiponut, (gizelle.tiponut@uleth.ca), the Education Abroad Coordinator-Outgoing.

Are there any Japanese Scholarships or Awards?

Yes! The Nikkei Cultural Society of Lethbridge and Area generously donates these to our students: