Joblonkay unearths his passion at the U of L 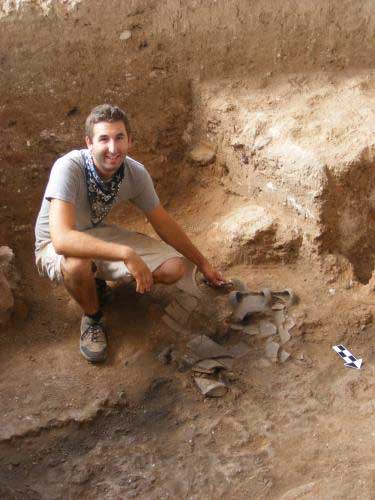 Darren Joblonkay credits the U of L for igniting his interest in history.
By STACY SEGUIN

As a teenager, Darren Joblonkay (BSc ’10) knew he wanted to be a lawyer, and you could often find him at the local courthouse, watching various trials. By the time he graduated from Catholic Central High School however, his interest in travel and history far outweighed his fascination with the law. It was during his first semester at the University of Lethbridge that Joblonkay ultimately decided he would rather unearth ancient history than make history in the courtroom.

“It was really on a whim that I decided I wanted to discover and contribute to our knowledge of the human past,” says Joblonkay, currently pursuing a master’s degree in Ancient Near-Eastern Studies at the University of Toronto.

“When I began attending the University of Lethbridge, I really had no idea how big the field of archaeology is, but Dr. Walter Aufrecht intrigued me with his knowledge of the ancient Near East – particularly ancient Syria-Palestine. My first-year classes in the archaeology of Mesopotamia and Classical Hebrew were what really drove me to pursue Syro-Palestinian archaeology.”

During his U of L years, Joblonkay took full advantage of the unique opportunities the University, and it's smaller, more personable nature, can provide to undergraduate students.

“Smaller classes make for more interesting seminars,” explains Joblonkay. “Having the chance to work for your professors at the undergraduate level, to be a student marker, getting experience giving presentations in class, being part of a class project because there are only five students – these opportunities aren’t available to most undergraduates elsewhere.

“My experiences working in a lab, working as a research assistant and getting the opportunity to take on roles with greater responsibility at the University gave me a substantial edge over those students who attended larger institutions at the bachelor level.”

During the summer of 2007, Joblonkay travelled with fellow students under the direction of U of L professor, Dr. Shawn Bubel, to Tel Beth Shemesh, an archaeological site 20km west of Jerusalem. Since then, Joblonkay has spent every summer working at archaeological digs around Israel.

“I think the real “aha” moment that led to my career was attending the field school at Tel Beth Shemesh,” says Joblonkay. “It was the shear intensity of the excavation experience. Where else do you get to unearth a bronze spear point used over 3,000 years ago, to walk on a tampered or cobble floor that hasn’t been stepped on in literally millennia, to experience a sunrise as you watch a Bedouin man tending to a flock of sheep? These and many other experiences all come together and form very fond memories of what it really means to be an archaeologist.”

The opportunity to continue his academic studies with the exclusive Near and Middle Eastern Civilization Department at the University of Toronto is something for which Joblonkay is very grateful. He gives a lot of credit for his preparation and acceptance to this one-of-a-kind Canadian program to his professors at the U of L.

“The professors at the U of L are amazing. They prepared me for graduate work at one of Canada’s most prestigious institutions. They are supportive, approachable, well qualified and they do a great job of teaching and incorporating their own research into their classes,” remembers Joblonkay. “There is a great combination of traditional and younger scholars who bring new ideas and theories to the University. They expected the height of academic excellence and pushed me to achieve. Their passion for the discipline really rubbed off on me.”

Joblonkay brings that passion to his work at the University of Toronto, where he works as an archaeological assistant while he continues his master’s degree. In the summer of 2011, he will be digging at Tell Tayinat in Turkey, which he hopes will lead to his dissertation.

“I would like to eventually be a professor in Near Eastern Archaeology. I believe it was one of my mentors who told me once that “any archaeologist would be lying if they said they didn’t like digging up treasures”, but our discipline runs deeper than that,” he says. “We attempt to preserve and understand humanity’s cultural history. We are all captivated by what humans were able to achieve in the past.”

• Joblonkay graduated from the U of L with Great Distinction, earning a BSc in Archaeology and Geography while concentrating on Geographical Information Science.

• He is the recipient of numerous scholarships totalling more than $13,000.

• He is a member of the Archaeological Society of Alberta and the American School of Oriental Research.

• Joblonkay’s mother, Margaret, works in the Faculty of Education as administrative support in the Graduate Studies and Research office.