About the Provost's Office 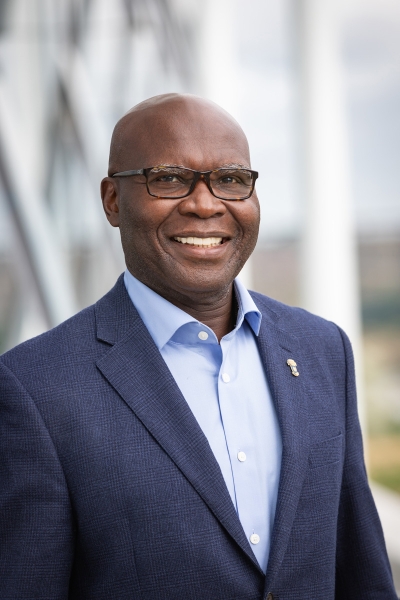 A native of Ghana, Dr. Okine completed his Bachelor of Science (1978) and Master of Science (1981) in Animal Science at the University of Ghana in Legon, followed by his PhD (1990) at the University of Alberta. He served as a lecturer at the University of Ghana from 1983 to 1985, prior to the completion of his PhD in Animal Nutrition and Digestive Physiology. From 1990 to 1994 he was a sessional lecturer/research associate and postdoctoral fellow in what is now the U of A’s Department of Agricultural, Food and Nutritional Science (AFNS). Dr. Okine then served as a senior research scientist with Alberta Agriculture and Rural Development at the Lacombe Research Centre from 1994 to 2001. He joined the University of Alberta as an associate professor and Alberta Agriculture and Rural Development Chair in Ruminant Nutrition and Metabolism in AFNS in 2001, was promoted to full professor in 2007, and served as Chair of the department from 2005 to 2014.

Dr. Okine’s research interests focus on topics relevant to Canadian agriculture, including: elucidating the roles of the key enzymes involved in marbling and synthesis of sub-cutaneous adipose tissue in beef cattle; providing insights into mechanisms controlling glucose and starch utilization for increased animal productivity; and residual feed intake (RFI), methane emission and mitigation in the ruminant animal, especially in beef cattle. Over his career, he has supervised and co-supervised at least 30 MSc and PhD students and 15 post-doctoral fellows and research associates.

For his leadership in agricultural research, Dr. Okine has received a number of awards over the course of his career, including the Alberta Premier’s Silver Award for Excellence in Agricultural Research (2000), being named a Fellow of the Canadian Society of Animal Science in 2009, and Fellow of the International College of Nutrition (2006). He is a member of the Alberta Research and Innovation Advisory Committee, which provides strategic advice and recommendations for research and innovation to the Government of Alberta.

In his role as Vice-President (Research) at the U of L, Dr. Okine led a team that provided co-ordination and direction through broad themes of interdisciplinary approaches, effective collaborations within and across faculties, new partnerships, new opportunities with industry partners, communities, provincially, nationally and internationally, to further enhance the University of Lethbridge research successes and fulfill the vision of being Alberta’s Destination University.