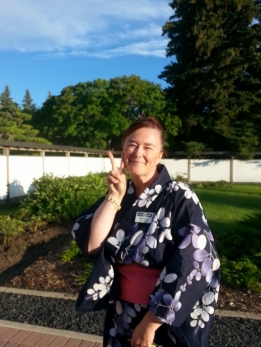 In 2016 Michelle played a major role in the introduction of a winter attraction (The Winter Light Festival) to the Gardens, which resulted in an increase of 2 months in their operating season.

Michelle led the City of Lethbridge in Canada’s 150th celebrations in 2017, which included the Gardens being recognized by the Province and designated a Municipal and Provincial historical resource.  In line with these celebrations, Michelle and the Nikka Yuko Japanese Gardens hosted Her Imperial Highness, Princess Ayako of Takamado for the 50th Anniversary of the Gardens.

Presently the Lethbridge and District Japanese Garden Society is currently working on their largest expansion since opening their gates as a Centennial project in 1967.

Michelle has many years of volunteerism in various dimensions throughout the Province of Alberta and currently represents the University of Lethbridge in a Senator role.  She is a true Albertan who has lived and experienced the culture of many communities in this province.  Michelle appreciates and enjoys the diversity of her province and of the Garden’s Japanese and Canadian Culture.