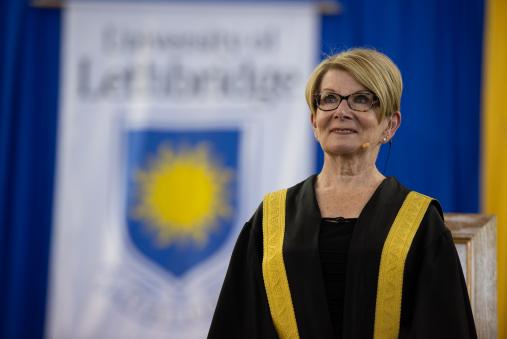 A local business owner and longtime health-care provider in the community, Varzari has obtained two degrees from the University, served on both the Senate and Board of Governors, and seen two daughters also earn degrees at the UofL.

"It is a great honour to welcome Janice as our new Chancellor," says University of Lethbridge President and Vice-Chancellor Dr. Mike Mahon. "She has served the community as a volunteer, business owner and health-care practitioner over the years and is very much a champion for the University of Lethbridge. Her contributions as a member of the Board and of Senate speak to her commitment to the vision of the University and we're excited about what she will bring to her new role as University Chancellor."

Varzari's connection to the UofL began with her time as a student, first in the Bachelor of Nursing program, from which she graduated in 1990 with Great Distinction while earning the Gold Medal in Nursing. She returned to the University to complete a Master of Education with Specialization in Counselling Psychology in 2002. In 2008, Varzari was inducted into the University of Lethbridge Alumni Honour Society.

"I am thrilled to have the opportunity to continue to advocate for the University of Lethbridge in my new role as Chancellor," says Varzari. "It is an incredibly exciting time for the University. As we approach our 50th anniversary, the UofL has established itself as one of the most respected and influential universities of its size in the country. All the while, it has been a community leader, economically, educationally, and culturally. The continued development of the Destination Project will only enhance our connection to southern Alberta and further engage our community."

Professionally, Varzari served in health care for a number of years, beginning as a staff nurse at the Lethbridge Regional Hospital in 1972. She went on to assume roles as a nursing educator and assessment nurse before taking on the position of Home Care Coordinator for the Chinook Health Region, a post she held from 1990 to 2000. She then concentrated her efforts on assisting the community in a mental health capacity, serving as the Mental Health Counsellor for Lethbridge Family Services from 2001 through 2010.

Varzari is also vice-president and co-owner (with her husband Glenn) of National Salvage Ltd. and National Holdings Ltd.

Janice Varzari was officially installed as Chancellor at the University's Spring Convocation ceremony held on May 28, 2015, and hosted the annual Chancellor's Dinner that same evening.