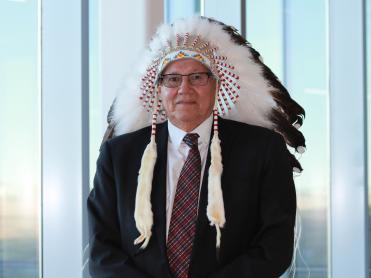 Taatsiikiipoyii, former Blood Tribe Chief and Treaty 7 Grand Chief Charles (Charlie) Weaselhead Jr. was born on the Blood Indian Reserve in 1949.  Since the early 1980's, Charles Weaselhead has worked hard to advance many health initiatives to improve the health care outcomes for the People, as Director of the treatment centres Napi Lodge and Poundmaker's Lodge; Director of the Blood Indian Hospital in the early 90's; and as Chief Executive Officer for the Blood Tribe Department of Health Inc. - a post he held until his successful election as Chief of the Blood Tribe and subsequent leadership from 2004-2016. Charles continues to maintain an interest in working with the University of Lethbridge and the Lethbridge College in advancing the lifelong education goals of our Indigenous members.

During Charles term as Blood Tribe Chief he was appointed as the Treaty 7 Grand Chief and held the Health and Education portfolio for the Treaty 7 Chiefs. Charles served on numerous Boards and Committees including the Aboriginal Healing Foundation Board of Directors, Committee Chairman for Community Violence Prevention on the Blood Reserve, the First Nations Information Governance Centre (Ottawa), the AFN's Chiefs Committee on Health, the Alberta First Nation's Information Governance Centre's Chiefs Senate, the Sheldon Kennedy Child Advocacy Centre and the Alberta Health Co-Management Committee.

Charles was a signatory to the Alberta Protocol Agreement on Government-to-Government Relations (2008) and the Memorandum of Understanding on First Nations Education (2010). His priorities include: implementing the United Nations Declaration on the Rights of Indigenous Peoples; long term planning initiatives to address education, health, economic, social and environmental issues; soliciting community participation and support; looking ahead to advancing the sovereignty of First Nations by protecting our inherent and treaty rights; exploration of new and innovative partnerships; and to the dire issues of housing, poverty, community violence and other social and health issues.

Currently Charles is a member of the Blood Tribe Department of Health Inc. Board of Directors, Aboriginal Liaison Red Cross, and Indigenous Knowledge Wisdom Centre Board of Director in partnership with the Treaty 6, 7 and 8, Provincial and Federal Education Departments.