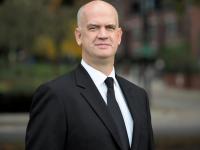 Terry lives in Vancouver where he is Managing Partner of Alexander Whitehead Executive Search, a boutique search firm specializing in the natural resources. He is also the Founder of Elev8Exec Coaching, a Vancouver-based executive coaching firm.

Terry is the Chair of the Advancement Committee and serves on the Executive and Compensation committees of the Board. In addition to the University of Lethbridge Board of Governors, he is also the Chair of the Vancouver International Film Festival (VIFF) Advisory Committee. He actively supports a number of campus awards and competitions, including the Bridge Prize, HistoriCity, and Play Right Prize student writing competitions, as well as the Spirit Prize and other initiatives involving Pronghorn athletics.