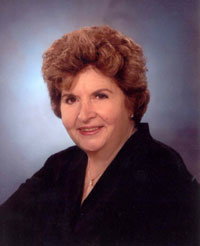 Through the late 1980s, Sharon Tennant's endeavours to build bridges between the UofL and the community were invaluable in the efforts to enhance local and provincial support for the University of Lethbridge.

Born and raised in Washington, Sharon Tennant graduated fro Gonzaga University in Spokane, with a degree in accounting. She went on to settle in Saskatoon, where she established and ran an accounting and tax business. In 1987, her husbance Howard Tennant became the President of the University of Lethbridge. Sharon Tennant was, and remains, a valuable asset to the institution.

Sharon Tennant served the University and the community with enviable commitment, and strove to develop mutually-beneficial connections between the two. With consummate grace, Sharon Tennant organized a dizzying array of meetings, social events and dinners, and hosted international, nationl and provincial visitors and the UofL employee groups. The apparent effortlessness of her hospitality is tribute to the many hours of hard work and dedication that went into the events she organized. Within the community, she ahs served on a variety of boards, including the United Appeal and the South Western Alberta Handicap Association.

Sharon Tennant is a very deserving recipient of the Senate Volunteer Award for volunteer work on behalf of the University of Lethbridge.