Having worked for several years after her high school graduation, Maria Livingston came to the University of Lethbridge knowing she wanted to do something more—however she wasn’t sure what. 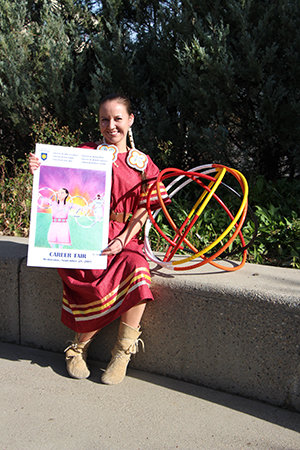 As a Cree fish-scale artist and hoop dancer, Maria was initially interested in the U of L’s fine arts program. While her mother and older sister both graduated with Native American studies (NAS) degrees from the U of L, Maria’s interest in NAS was sparked by her participation in the First Nations Transition Program (FNTP) and her exposure to Native American viewpoints through the variety of courses she took during her first year of university. Now, having transferred to an NAS degree herself, Maria is finding new ways to apply her artistic talents to her studies and future career working with First Nations, Metis and Inuit (FNMI) youth.

Maria’s passion for her art and culture truly carries through in what she does. The unique style of her hoop dancing invites people to ask questions and become involved. She uses her art to bridge cultural gaps and help others realize the importance of FNMI culture. “The courses I’ve taken have made me think in different ways and shifted what I feel is important and how I can give back to the communities,” says Maria.

Since starting her journey at the U of L, Maria has become incredibly active in the FNMI community. As part of the FNTP program, she was introduced to several professors and members of the community. She also met people through community events, the Native American Students’ Association and one of the U of L’s many Speakers Series. She’s part of the FNMI mentorship program, which works to help give junior high and high school students role models and introduce them to the community. Maria also recently became part of the Aboriginal Education Committee Cultural Advancement working group, who aim to “increase the overall awareness of and sensitivity to the diversity of First nations, Metis, and Inuit peoples, in the university, City of Lethbridge and surrounding communities."

Maria is incredibly proactive, putting herself out there and making an effort to take advantage of every opportunity afforded to her. “I was told in my first year to make use of the professor’s office hours, so I’ve kept doing that over the years. You get to know them on a more personal level,” explains Maria. “Dr. Michelle Hogue has written me reference letters and she’s helped me so much throughout my whole degree. Whereas is if didn’t go out and ask her and get to know her better that probably wouldn’t have happened.”

In addition, Maria has completed three applied studies courses. She has done work on a project about Blackfoot childrearing, as well as participated in the Nicholas de Grandmaison Oral History Project. Her applied studies eventually led her to her current work collaborating with an education student to build lesson plans for Grades 7, 8 and 10, with a focus on the importance of preserving history and culture. “I think it’s really cool,” she says. “It’s an application of the knowledge that I’ve learned from previous courses. Now I’m creating something.”

Finding the direction she wants to take her career in is only a small part of Maria’s U of L experience though: "The past five years have been very influential on knowing my identity,” says Maria. “I found where I fit in and what I'm supposed to do.”

UPDATE: Maria graduated with a BA (Native American Studies" in 2015 and is now a Program Specialist with Indigenous Student Affairs at the University of Lethbridge.