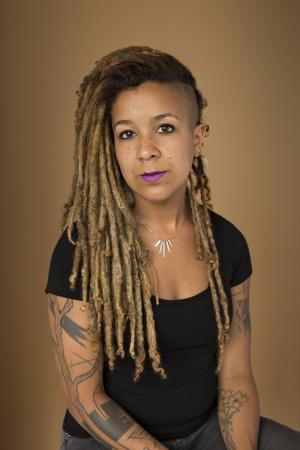 Free. Everyone welcome. No RSVP required.

Robyn Maynard is the author of Policing Black Lives: State violence in Canada from slavery to the present (Fernwood 2017). The book, her first, is a national bestseller in its third printing. It was designated as one of the "best 100 books of 2017" by the Hill Times, and is the winner of the 2017 Errol Morris Book Award. It was also shortlisted for an Atlantic Book Award and is currently a finalist for the Mavis Gallant Prize for Non-Fiction and the Concordia University First Book Prize. This work received a starred review in Publishers Weekly, as well as glowing reviews in the Toronto Star, the Globe and Mail, Now Toronto, Maclean's, and the Ottawa Citizen. In the words of the Winnipeg Free Press: "Every Canadian — black, white, Indigenous or otherwise — could benefit from reading Maynard’s frank and thorough assessment of racism in Canada". Helping to create a national conversation on anti-Black racism in Canada, she has been touring the book across Canada to sold-out venues since its release. The book has recently been translated to french for Mémoire d’encrier , and NoirEs sous surveillance :. Esclavage, répression et violence d’État au Canada is now available in stores.

Delving behind Canada’s veneer of multiculturalism and tolerance, Policing Black Lives traces the violent realities of anti-blackness from the slave ships to prisons, classrooms and beyond. Robyn Maynard provides readers with the first comprehensive account of nearly four hundred years of state-sanctioned surveillance, criminalization and punishment of Black life in Canada. While highlighting the ubiquity of Black resistance, Policing Black Lives traces the still-living legacy of slavery across multiple institutions, shedding light on the social and historical forces behind Black poverty and unemployment, racial profiling, police violence, disproportionate incarceration, immigration detention and deportation, exploitative migrant labour practices, disproportionate child removal and the school-to-prison pipeline. Emerging from a critical race feminist framework that insists that all Black lives matter, Maynard’s intersectional approach to anti-Black racism addresses the unique and understudied impacts of state violence as it is experienced by Black women, Black people with disabilities, as well as queer, trans, and undocumented Black communities. A call-to-action, Policing Black Lives urges readers to work toward dismantling structures of racial domination and re-imagining a more just society.

Maynard has published writing in the Washington Post, World Policy Journal, the Toronto Star, the Montreal Gazette and Canadian Women's Studies journal, as well as an essay for Maisonneuve Magazine which won the acclaim of "most-read essay of 2017". Her writing on race, gender, and discrimination is taught widely in universities across Canada and the United States. Her expertise is regularly sought in local, national and international media outlets including The Guardian and the Globe and Mail. She has spoken before Parliamentary subcommittees and the United Nations Working Group of Experts on People of African Descent.

Additionally, Maynard has a long history of involvement in community activism and advocacy. She been a part of grassroots movements against racial profiling, police violence, detention and deportation for over a decade and has an extensive work history in harm reduction based service provision.

This presentation is made possible thanks to our generous sponsors: