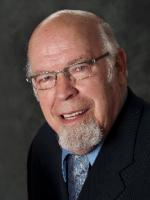 Teaching and Mentoring at U of L

Martin Oordt was born in 1938 in Lynden, Washington. He joined the founding faculty at the University of Lethbridge in 1967 after studying English Literature at Calvin College and the University of Kentucky. He taught Renaissance Literature and Creative Writing. In 1996, he received the U of L Medal for Distinguished Teaching. One of his great pleasures was writing poetry and collaborating with other artists.

Service at U of L

His service to the University over the course of his academic career might be described as prodigious. In addition to serving on innumerable departmental and administrative committees, he has also served as chair of the English department’s Writer-in-Residence program and Creative Writing Committee and as coordinator of the Colloquium Study program.
He was an advisor to the student newspaper, The Meliorist, in its earliest days, and is an ongoing advisor and contributor to Whetstone, which he co-founded and which is now one of Canada’s oldest literary magazines.
If a teacher can be measured by the success of his students, then an easy way to praise Professor Oordt would be to list those of his proteges who have achieved great things themselves. Such a list would include Peter Christensen, Marlene Cookshaw, Lorne Daniel and Yvonne Trainer -all former students who have published two or more books in Canada.

Oordt was a writer and poet and throughout his life, Marty mentored many poets and writers. Upon retirement in 1997, Marty co-owned and published Lethbridge living Magazine for ten years with a goal of enhancing the identity of Southern Alberta.

He volunteered as a fundraiser for the Galt Museum, Lethbridge Symphony Association and Empress Theatre.

Memories of a mentor, Lorne Daniel