In an age when tension between religions has reached a critical point, the need for dialogue, understanding and tolerance has never been more important. An Endowment at the University of lethbridge is supporting Islamic studies, and cultivating an understanding of world religions and appreciation of diversity.

Islam is one of the world’s great religious traditions – and one of the fastest growing in the West – but it is not without controversy. Since 9-11 particularly, Islam has been at the forefront of many discussions about the challenges of religious tolerance and increasing cultural diversity in the West.

It is also the subject of academic inquiry in the University of Lethbridge’s small Department of Religious Studies and for students like Campbell Peat (BA ’08) and James Falconer who study with religious studies professor Atif Khalil. What these students point out is that discussions about “Islam in the West” in the media, and by politicians and pundits alike, lack depth and empathy, and often are coloured by Islamophobia. 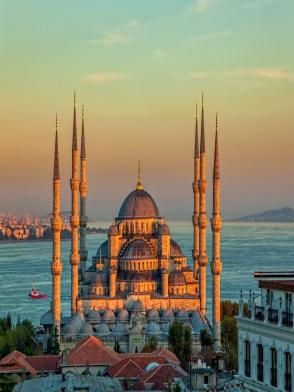 “That geopolitical conflicts have been framed in terms of religion or a clash of civilizations seems more like a convenient way for the West to label the ‘other’ as irrational and extremist while concealing the real roots of the conflicts,” says Falconer.

As a student and research assistant in the Department of Sociology at the U of L, Falconer has studied Muslim immigration in the West, complementing his studies with courses about Islam to better understand the cultural and religious context of those he researches.

“The courses in Islamic studies have the potential to help transcend the profound misunderstandings about Islam held by those in western societies, myself included,” says Falconer.

“Muslim immigrants are overwhelmingly educated, secularist, progressive and modern – that’s why they immigrated to the West,” he goes on to explain.

Muslim immigrants to western countries like Canada often find themselves confronted in their new country by misgivings and misunderstandings about their faith, and ultimately about them as citizens.

It was with the hope of dispelling these kinds of misunderstandings that one such Canadian immigrant, the late Dr. Mushtaq Khan, who was a senior research scientist at the Lethbridge Research Station for 28 years, and his wife Catherine Khan (BEd ’72, BASc ’77), who served as president of the U of L Alumni Association from 1975-1977, established the Mushtaq and Catherine Khan Endowment at the University of Lethbridge.

“We wanted people to know what Islam really is, and that Muslims have about as much to do with terrorism as you or me,” Catherine explains. “Most of the people who are Muslim are peaceful, law-abiding citizens who only want to live at peace with their neighbours.”

After the events of 9-11, the need for education and cross-cultural understanding only grew. The Khans believed that in supporting education about Islam, they were supporting a future with increased tolerance and less fear.

“We thought if there was more education about what Islam really is then people wouldn’t be afraid of it as much as they are,” Catherine explains.The Khans’ financial support enabled the Department of Religious Studies to recruit Professor Khalil in 2007 and to attract prominent scholars to speak at the University on the topic of Islam. Khalil, who teaches classes ranging from world religions to upper-level philosophy and theology courses, notes the importance of studying Islam in a country with a growing Muslim population and intensifying anti-Islamic sentiments in the media.

“Canadians, in my view, should not be afraid. Even though there are forms of Islam that are isolationist and exclusivist, mainstream Canadian Islam, which is the Islam of the vast majority of Muslims, stresses peaceful coexistence and tolerance,” says Khalil. He hopes that through his courses and the study of Islam and religion more generally, students will come to appreciate the diversity and complexity of religion, allowing them to form relationships of respect with their peers and neighbours, rather than fear or hostility.

Since Khalil’s arrival at the U of L and the support from the Khans, the department has expanded its library holdings and attracted some high-profile speakers. Most notable, however, is the benefit to the student population and to the wider community.

“It is my hope that our courses on Islam instil in students a greater appreciation of the richness and diversity of our world, of our religious traditions and of the collective wisdom of the human race,” says Khalil. It’s a sentiment that has captured the imaginations of many who pass through the department and that is mirrored in the testimony of his students.

“If anything, the promotion of Islamic studies encourages the individual to adopt a reflective position that approaches Islam as a multidimensional display of human emotion and belief,” says Peat. “Even a basic understanding of Islam goes a great way to combat ideas of cultural antagonism.”

Falconer agrees, and says that he was surprised to learn that Islamic and western civilizations share the same intellectual roots. “They are more compatible than most would imagine based on modern western portrayals and perceptions of Islam,” he says.

The Khans’ donation has sown the seeds for a future in which mutual understanding and respect between people might blossom.

“Mushtaq was always tolerant of other religions and encouraged tolerance from others,” recalls Catherine. “It was his hope that others in his adopted Canadian community could at minimum attempt to understand Islam.”

The hopes that fuelled the donation to the University are being fulfilled as hundreds of students every semester enrol in the department’s courses and are increasingly exposed to the religions and cultures of their Canadian neighbours.

“The fact that the son of a farmer is able to study one of the world’s great traditions in the southern Alberta town he grew up in is simply astounding,” says Peat. “Even in smaller communities like Lethbridge we are able to see the effects of global integration. Without founding a multicultural spirit and exploratory ethos we run the risk of letting our ideas of Islam (or any religion, for that matter) become superficial and narrow.”

The Khans’ commitment to supporting liberal education and the study of religion is indeed one step in the right direction toward a society more tolerant, just and curious about the beliefs of others. It is clear this contribution is helping to mould thoughtful citizens, leaders and educators of tomorrow who are less focused on religious differences and more interested in exploring our shared human experiences. 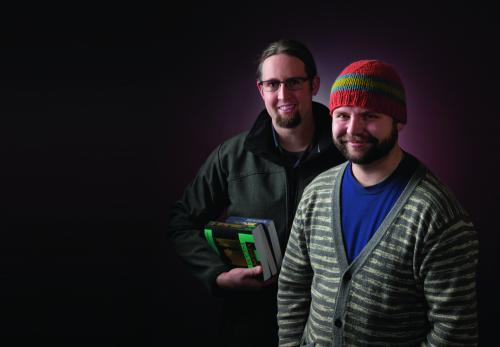 Grad student Campbell Peat (right) is currently completing his MA on the Spanish Sufi mystic, Ibn Arabi, and intends to pursue doctoral work in the near future. Undergraduate James Falconer (left) has completed his degree requirements and will convocate in June 2011. He intends to pursue an MA in sociology.