Alumnus Matthew Salmon immerses himself in the culture and history of Yemen. 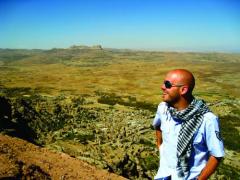 The ancient city of Sana’a in Yemen is a place of paradoxes. People in long robes with covered heads and veiled faces line the busy streets, while adjacent shop windows showcase western mannequins sporting the latest in high fashion.

Luxury vehicles veer stealthily around four-wheeled relics that by all accounts shouldn’t be able to move. Street vendors hawk pirated Hollywood movies long before they’ve reached theatre screens in the West, while calls to prayer resound across the city fives times each day.

It’s here, in the centre of Sana’a, the oldest, most vibrant and energetic part of the city, that U of L alumnus Matthew Salmon (BA’09) has made a home.

Salmon graduated with a degree in Religious Studies, finishing with an impressive 4.0 average, and an applied study to his credit – he served as the co-ordinator for the Religious Studies Annual Conference in 2008. He says he always knew he’d travel to further his learning, but wasn’t always sure where he’d go.

“I wanted to find a place where I could immerse myself in the culture and history, and also in interesting political situations,” says Salmon. “Without that, the trip would be nothing more than a glorified holiday.”

In Yemen, Salmon found what he was looking for in spades. He arrived in September 2009 with the intent of staying one year to work and study. He admits now that his stint will likely last much longer, largely because the goals Salmon set for the trip have changed since he got there.

“I came with two goals in mind: to understand a culture completely misunderstood in the West, and to provide a window into that culture for people back home.”

Salmon’s priorities have since expanded to contributing to and nurturing Yemeni culture – a society he’s grown to love, despite what he says are its obvious shortcomings. He felt the focus of his trip evolved when he took jobs with both the Yemen Special Olympics and the Yemen Observer, a local English newspaper.

“I’ve seen two different sides of Yemen – one hyper-political and one overwhelmingly compassionate,” says Salmon. “Through the Special Olympics, and just through everyday interaction with people on the street, I’ve seen the very best of Yemeni spirit. The traditional lifestyle is intoxicating, as is the good-natured disposition of the people.”

Salmon’s work as an editor and freelance journalist with the Yemeni Observer opened many doors for him across the country, a few of which Salmon concedes have caused unsettling results. Threats aren’t unusual, and Salmon and the rest of the paper’s staff have had occasion to change behavioural patterns for the sake of their own security. To make matters more tense, Salmon is also a student at the Sana’a Institute for Arabic Language – a school that Umar Farouk Abdulmutallab attended – the man involved in the botched terrorist attempt on a Detroit-bound flight in December 2009. Salmon expresses sadness and disbelief at the situation, but finds extremist actions of this nature more reason to expose the complete picture of Islam.

“I am no longer content to just observe and report. I feel a need to be engaged and active. I’d rather be part of the solution than part of the problem. There is beauty and goodness mingled with Yemen’s darker side.”

Salmon says that his planned one-year stay will likely be extended to two or three, depending on the political climate. Learning Arabic is taking longer than he anticipated, and the more he delves into the culture, the more compelled he feels to remain there to assist in the country’s growth and betterment. Graduate study in Canada, however, is the ultimate goal.

“I want to apply what I’m learning in a liberal university setting,” says Salmon. “My time in Yemen is a direct manifestation of the critical thinking and liberal education I got at the U of L.”

As seen in The Legend