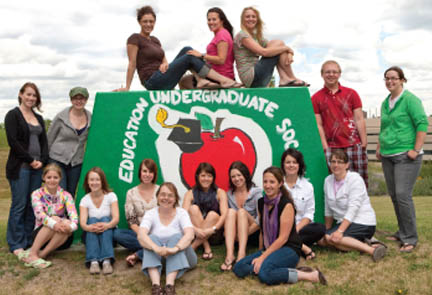 The Education Undergraduate Society (EUS) has always been a way for students in the Faculty of Education to connect in the spirit of camaraderie and support. But now, more than ever, the EUS is also a way for Education students to become active participants in the greater community, giving undergrads the opportunity to constructively contribute to the municipalities and schools that they will be working in.

Karen Davis, EUS president for 2009, sees the EUS shift in focus from student-centered to community-centered as a positive change with far reaching impacts.

“The benefits are significant on both sides of the equation,” Davis says. “As students in the faculty, we spend a lot of time in the community – perhaps more than we do on campus. Supporting the community and the schools makes for a better experience   for everyone.”

The EUS has begun running several new programs in recent years, all geared toward more active community involvement and the betterment of the education system at large.

One of the most well-received is the student backpack initiative, whereby each class in the faculty is given a new backpack and a list of suggested school items with which to fill it. The brimming backpacks are then returned to the EUS and distributed to schools, destined for kids that otherwise go without basic supplies.

“The students really get into it,” Davis says. “We’ve had classes return three or four full backpacks, rather than just the one they were assigned.”

A second community initiative which was launched two years ago – Anti-bullying Awareness Week – is receiving accolades province-wide. The seven-day event features various speakers from the Alberta Teacher’s Association, covering topics that surround the issue of bullying. One of the lectures during last year’s event covered the topic of cyberbullying, informing teachers and teachers-to-be on the signs to watch for and ways to deal with the problem of students being bullied over e-mail and text messages.

EUS members also volunteer with many community organizations, including the local food bank.

“Our goal is to be as active and helpful in the community as we can be,” Davis says of EUS members. “Being involved creates a better community of teachers and a better environment for students.”