At the age of 88, William Morgan (aka "Beansie") decided it was time to take up the guitar! He credits his instructor and mentor, Dale Ketcheson, with helping him learn a second language - the language of music! We sat down with William to ask him a bit about what inspired him to start his musical adventure at this stage in life... and how exactly he got the nickname Beansie!

Where does the nickname "Beansie" come from?

I played hockey all my life - I played until I was 73 years old! Once, back when I was 15 or 16, we were on the road and we ran out of meal money. Between the twelve of us, we had $3.17, so they sent me into the grocery store and I came out with a big can of beans. Well, we opened them up and passed them around with a spoon. They've been calling me Beansie ever since, but never, ever, sent me in to buy groceries again!

Tell us a bit about your musical background, did you play any instruments growing up?

I played accordion for a while. There is a funny story about that. I was playing the Battle Hymn of the Republic - just booming it out! And then my daughter came along and said, 'Hey dad, what do they give you to play when you go up to heaven?'. I told her a harp. 'Well then,' she said, 'if you don't make it there, and you end up down below, I think they give you an accordion!'. So I put it away and haven't played it since!

What made you decide to take up guitar?

When you take something out of your life... then you've got to fill that void with something else. So I found music! I had access to a nice guitar. My ambition is to learn the theme songs to the top 100 movies. I got started by learning how to play 'The Sting'.

What has been the hardest part about learning to play guitar?

Reading the music. Because I don't have a natural ear for music, it means that I have to read the notes, which is good because it means I am playing the way the composer wrote it.

You’ve mentioned that you feel privileged to have Dale Ketcheson as your mentor. What are some things that make Dale such a great instructor?

Everything nice you could say about a human being, really. I sort of accuse him of using me as his Mount Everest. He had a choice between teaching me how to play, and climbing a mountain. Climbing the mountain would have been easier, I think.

What advice do you have for other adult learners who are thinking about studying music?

Music has given me a whole new life! When you run into something hard, and you think 'there's no way', like a real difficult lick or something, and then you nail it - it's so exhilarating! It's never too late. You learn Music one bar at a time.

William Morgan was born in Moose Jaw, SK, and has spent years playing sports, flying airplanes, and doing the daily New York Times crossword puzzle. We are so happy to see his smiling face at Casa every week. Thank you for sharing your passion for life and music with us, Beansie! Feeling inspired to start your own musical journey? Check out our programs here! 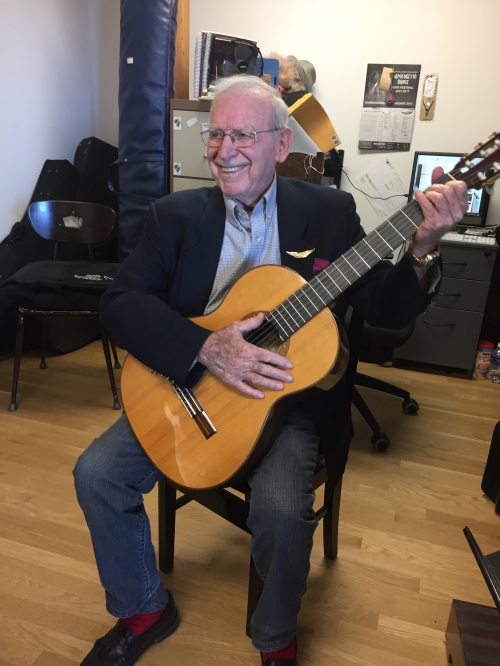