Regarded as one of the leading social demographers in the world, Dr. Susan McDaniel has been named the winner of the 2016 University of Lethbridge Speaker Research Award. 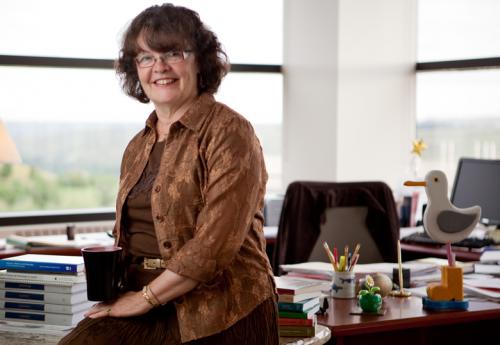 A prolific researcher, McDaniel’s ongoing projects focus on topics such as gender migration and the work of care, a comparison of income inequality in mid-life in Canada and the United States, and the difficulties of people living with low income in a variety of cultural settings.

She is noted as one of the few Canadian academics successfully able to bridge academia, government and the private sector. Using a keen sociological insight, McDaniel has illuminated social problems and issues facing individuals, families, institutions and societies in light of major shifts like aging, the Great Recession and the retrenchment of the welfare state.

A common thread throughout McDaniel’s work is the support of marginalized and disenfranchised groups such as older women, families living in poverty and workers at risk. Her ability to weave theory, research and policy together has influenced decision-making in health care, pensions and workplace reform.

Recognized as a Fellow of the Royal Society of Canada, McDaniel was appointed a Tier I Canada Research Chair in Global Population and Life Course in 2011, has written or co-written seven books and nearly 200 research articles. She is also a frequent conference keynote speaker, has served on the National Statistics Council for 15 years, is the vice-chair of the Canadian Council of Academies and has represented the Prime Minister’s Office at a consultation on demographic futures.

McDaniel will be presented with the Speaker Research Award during the Spring 2016 Convocation ceremonies, June 2-3, at the 1st Choice Savings Centre for Sport and Wellness.