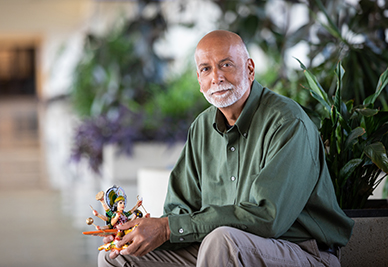 FREE. Everyone welcome. No RSVP required. Seating is limited, however, so arrive early! Light appetizers and a cash bar will be available.

If defined broadly, delusion is the firm belief in something that probably isn’t true. In many Eastern philosophies, delusions are endemic to the human condition and the cornerstones of most religions. In both Buddhist and Hindu philosophies, life’s highest goal, known in Sanskrit as nirvana or moksha, should be the ending of delusions. This is spiritual liberation, freedom from bondage to what is false. In this talk, I will discuss the overlap between two seemingly disparate areas of my research: one on the Hindu Great Goddess, Durga, and the other on contemporary philosophies of spiritual liberation by Eastern teachers, such as J. Krishnamurti.

Groomed by the once influential Theosophical Society to be a messianic teacher of a new world order, Krishnamurti rejected the role thrust upon him. Instead, he vehemently dismissed the value of organized religions, and blind beliefs in gods, rituals, and spiritual teachers in the quest for spiritual freedom. Like other Eastern sages, he urged people to inquire into whether such freedom is possible. Generally portrayed as multi-armed, weapon-wielding, and lion-riding, the Great Goddess Durga is widely worshipped throughout South Asia, sometimes with blood sacrifices. She seems to embody the quintessence of belief and practices grounded in the sort of religious delusions to which Krishnamurti points. What ever could they have in common? Much more, it seems, than at first glance!

In her mythic exploits and theologies, the Great Goddess is identified as Maya, the very power that enmeshes humanity in delusion. Thus, the Eastern philosophies of liberation symbolically entail combat with the Goddess. Is defeat inevitable?

The talk promises a visually engaging and thought-provoking journey through Eastern mythology and religious philosophies, and how we quest for meaning in our lives. Freedom from delusion is not guaranteed.

FREE. Everyone welcome. No RSVP required. Seating is limited, however, so arrive early!