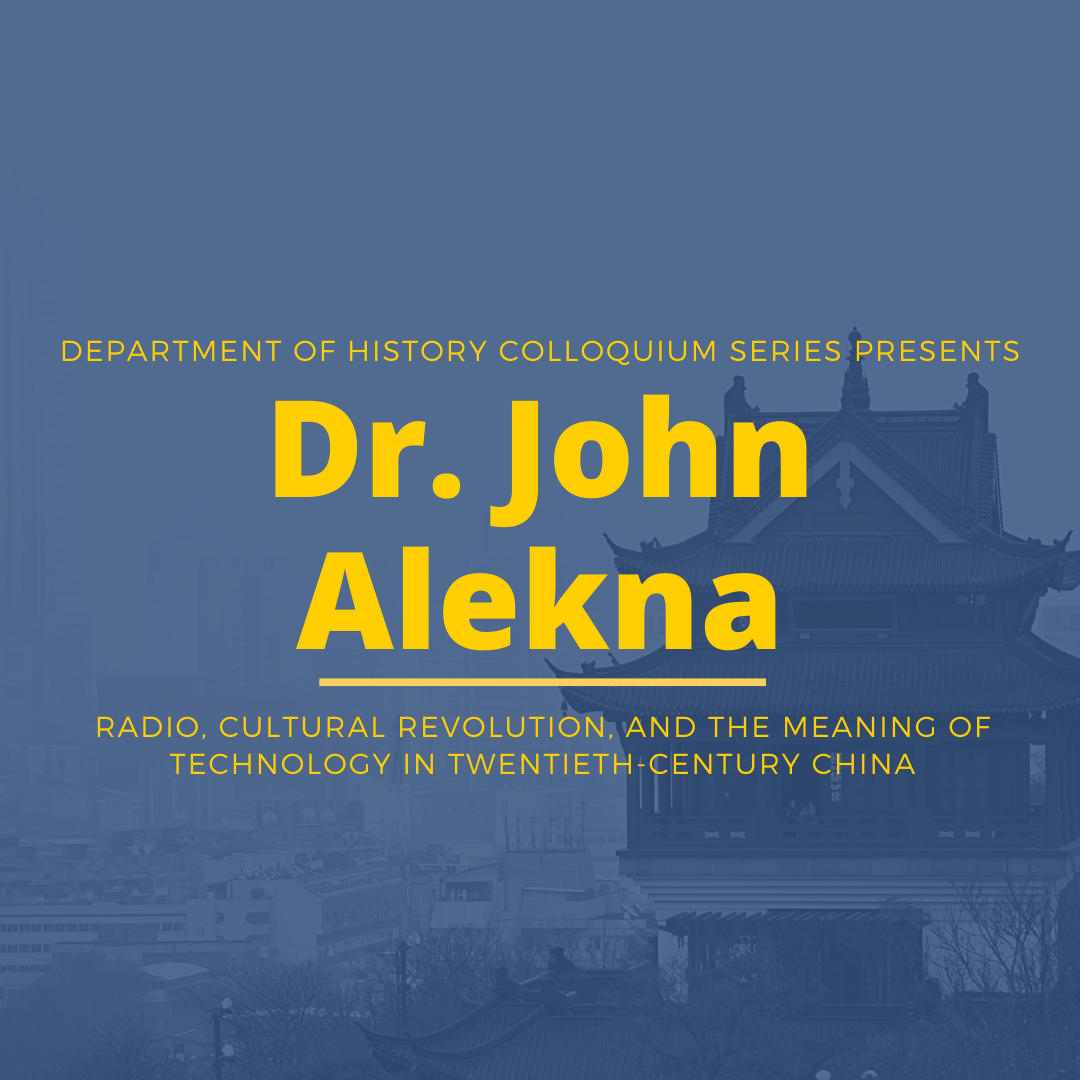 The Department of History Colloquium Series (co-sponsored by the Asian Studies Program) presents Radio, Cultural Revolution, and the Meaning of Technology in Twentieth-Century China with guest speaker Dr. John Alekna (Peking University). Dr. Alekna obtained his PhD from Princeton University in 2020 and is now an Assistant Professor of the History of Science, Technology, and Medicine at Peking University.

Register in advance for this meeting:
uleth.zoom.us/meeting/register/tJEsde-opjIvH9UqSUwarh5WERohJS6NCSCe

Over the last twenty years, new communications technologies have overturned key aspects of our political system, reshaped our media landscape, and mobilized large segments of society toward divergent ends. Yet this revolution is not unique. Interlocking technological, informational, and political revolutions have occurred many times in the past, in many cultures. My work aims to examine how one society, China, underwent such a shift over a fifty year period. How did individuals, especially the non-elite, experience the interrelated changes in news practices, technology, and politics? This lecture will focus on the last ten years of China’s longue durée news revolution, attempting to answer a question as relevant to our own time as theirs. In a society saturated with information, what happens when anyone can take control of the news?

When the Cultural Revolution began in 1966, the vast majority of people had been hearing artificial sound, and daily news, for less than ten years. In 1949, there had been less than a million radios in a country with 400 million people. By 1976, 100 million loudspeakers, strung through wired broadcast networks, delivered information every day to hundreds of millions of individuals. Before this new radio age, within every adult’s living memory, regular news and information had been restricted to the elite, literate, and urban. The ninety percent of people who lived in the countryside relied on word of mouth to glean information about the outside world. The newsscape—the infrastructures, geographies, and practices of news—had been radically different. Now, not only did most people receive news on a daily basis, but the wired broadcast system meant there was the potential for a significant degree of local control.

The development of this new informational and technological environment was inseparable from the development of new forms of political organization, particularly the mass mobilized party-state, over the same period. The co-production of an information-saturated newsscape and an all-encompassing political system is part of what I call in my work the technopolitical process. Mass politics cannot be formed without the technologies and practices of mass media, and vice versa. Yet the technopolitical process is not linear. Information saturation does not necessarily lead to uniformity, greater control, and more order. In fact, the forms and structures of a highly developed newsscape can, under the right conditions, result in political fragmentation and even chaos. Taking several episodes from the Cultural Revolution as examples, this lecture will examine the ways in which, perhaps counterintuitively, the proliferation of news can result in social breakdown.