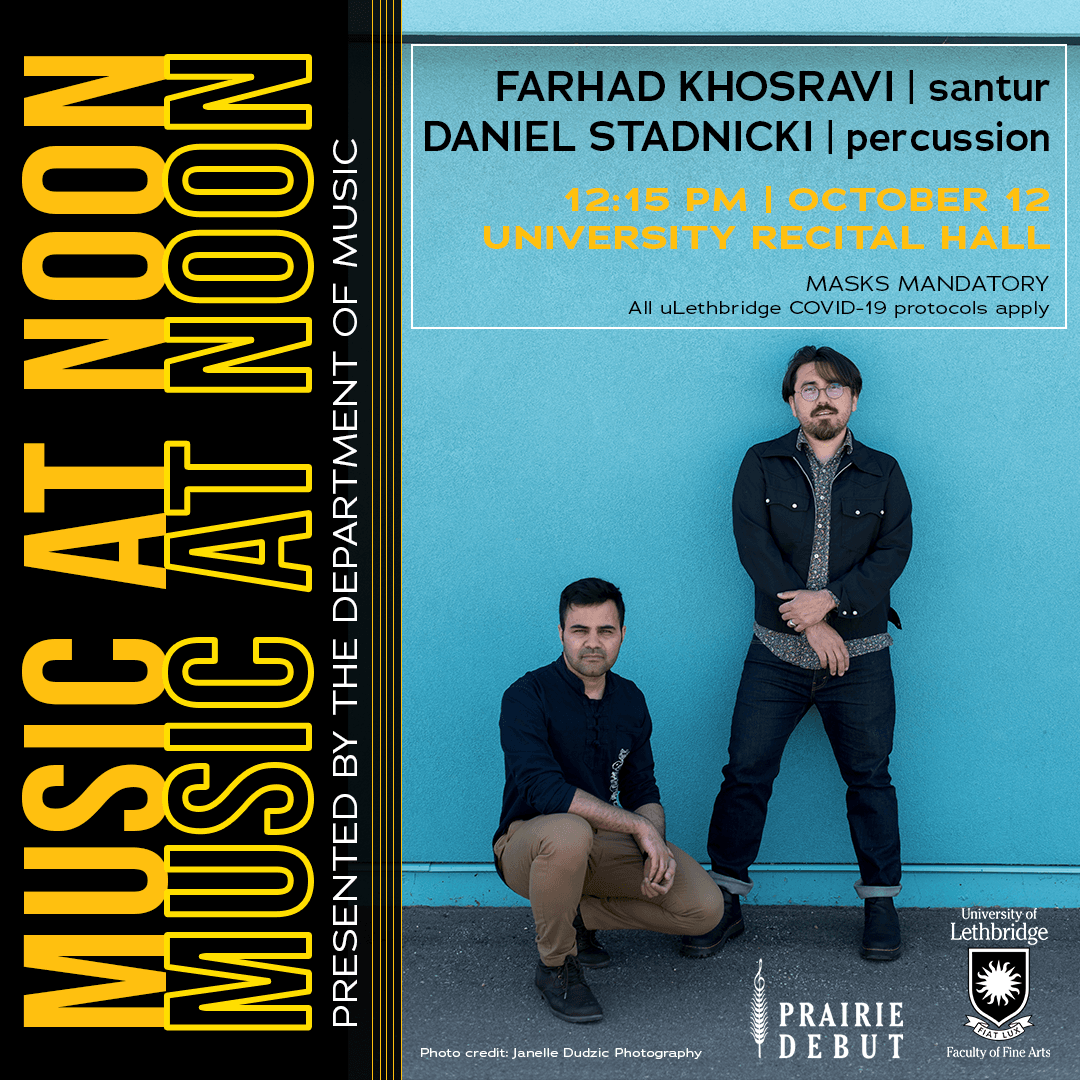 Farhad and Daniel will be playing a set of original compositions from their 2020 award winning album, "Mosàfer", as well as their 2017 album, "Sleeping in Sorrow".

Thank you to Prairie Debut for their collaboration in making this concert possible.

To keep our audiences safe, and in accordance with uLethbridge COVID-19 protocols and as part of the province's Restriction Exemption Program, starting September 20, 2021, audience members 12 years and older attending an event in any venue at the uLethbridge Centre for the Arts will be required to either show proof they have been fully vaccinated against COVID-19 or proof that they have tested negative for COVID-19 within 72 hours prior to attending the event. Event attendees will be asked to show this proof prior to entering any venue. Attendees who cannot provide this attestation will be refused entry. Masks are mandatory on campus and for the full duration of the recital. We appreciate our audience's understanding and support!

About the duo
Farhad and Daniel have been collaborating as a duo and in a string ensemble since 2017 starting with Farhad’s debut album titled, “Sleeping in Sorrow”. They released their second collaboration album, “Mosàfer”, in August 2020, for which Farhad received the 2020 Edmonton Music Prize. Although coming from very different cultural backgrounds, the long resonating tones of Farhad’s santur weave naturally with the earthy sounds of Daniel’s percussion, creating a seamless musical journey.

Edmonton-based composer and santur player Farhad Khosravi has been described by the Calgary Herald as “musical in every way, … combining fine improvisational qualities with his command of the instrumentally attractive, melodically alluring sounds of his santur.”

Khosravi expands the genre of his Iranian classical music roots, merging new textures of percussion with Western cello and violin to create a modern mélange of East and West. His first album, "Sleeping in Sorrow", was received with critical acclaim and Khosravi received a nomination for World Artist of the Year at the 2018 Western Canadian Music Awards.

Award-winning percussionist, music scholar, and educator Daniel Akira Stadnicki specializes in adapted drum kit practice. Based in Edmonton, he has performed across North America and Northern Europe, including the Stockholm Jazz Festival, the Dawson City Music Festival, WOMEX in Thessaloniki, Greece, and Sound Symposium in St. John’s, Newfoundland. Stadnicki recently completed his PhD studies in Music at the University of Alberta and is currently a Postdoctoral Fellow at McGill University.