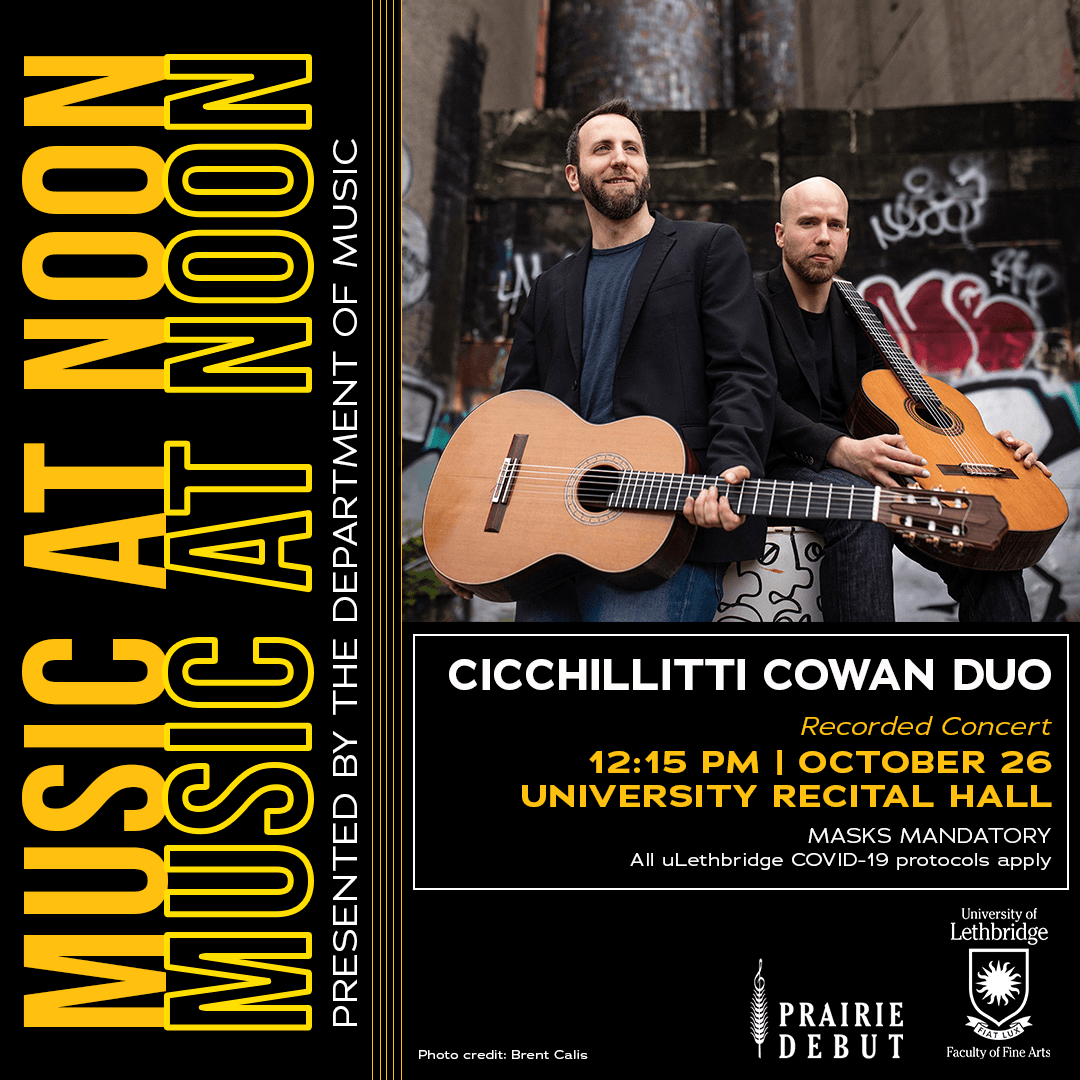 12:15 pm | October 26, 2021
A recorded concert will be shown in the University Recital Hall
Free admission
MASKS ARE MANDATORY | All uLethbridge COVID-19 protocols apply

Steve Cowan and Adam Cicchillitti are respected and acclaimed guitarists, quickly establishing themselves on both the guitar circuit and concert stages across Canada and abroad. Classical Guitar Magazine calls Cicchilllitti a “superb Canadian guitarist” and Cowan “one of Canada’s top contemporary classical guitarists.” Together, they form the dynamic ensemble Cicchillitti-Cowan Duo, a guitar partnership that focuses on expanding the guitar duo idiom through collaborations with living composers, while also performing popular duo works and their own arrangements of impressionist works from 20th-century France and Spain.

Thank you to Prairie Debut for their collaboration in making this concert possible.

To keep our audiences safe, and in accordance with uLethbridge COVID-19 protocols and as part of the province's Restriction Exemption Program, starting September 20, 2021, audience members 12 years and older attending an event in any venue at the uLethbridge Centre for the Arts will be required to either show proof they have been fully vaccinated against COVID-19 or proof that they have tested negative for COVID-19 within 72 hours prior to attending the event. Event attendees will be asked to show this proof prior to entering any venue. Attendees who cannot provide this attestation will be refused entry. Masks are mandatory on campus and for the full duration of the recital. We appreciate our audience's understanding and support!

Prize winner of nine major national and international performance competitions, seven of which are first prizes, Steve Cowan has performed throughout Canada, the United States, and Europe. His critically-acclaimed debut album, Pour guitare, features exclusively Canadian music. He has commissioned several new works for guitar and given world premieres in major cities such as Paris, Toronto, and New York. 2018-2019 was a milestone season, including Steve’s concerto debut with Ensemble del Arte in Germany and the release of a new album with the EMEC discos label in Madrid.

Adam Cicchillitti was named one of CBC’s Top 30 under 30 in 2017. His other performance activities have seen him tour Eastern Canada with Jeunesses Musicales and baritone Philippe Courchesne-Leboeuf. With an artistic sensitivity for lieder, Cicchillitti also arranged 20 of Schubert’s lieder to accompany Philippe Sly for their 2013 CBC Révélations performance. The video recordings from this partnership has reached hundreds of thousands of people internationally through social media. Adam is the founder of the guitar program at Ottawa Suzuki Strings and a specialist in child pedagogy.