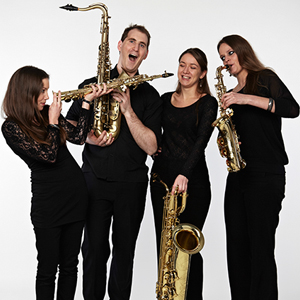 They are four friends, bonded together through combined talents and a passion to share music, and for their first time performing in Canada, Sirocco Saxophone Quartet graces the University Theatre stage for an evening of original music, Sept. 13 at 8 pm.

Formed in 2006 at the Royal College of Music, Sirocco Saxophone Quartet has continued performing throughout Europe, despite its members living in different countries. Michaela Stapleton and Huw Wiggin reside in the UK, while Greta Schaller and Gregor Böhmerle are from Germany, yet they maintain a strong friendship and commitment to preparing and performing. In 2009, they were Park Lane Group Artists, and in 2011 received a Musicians Benevolent Fund Ensemble Award. This spring, they released their first album, La Danza.

During their stay at the University of Lethbridge, the quartet is recording their second album at the Digital Audio Arts recording facility, Studio 1. The album features a collection of new compositions, including a piece written for Sirocco Saxophone Quartet by Department of Music faculty member, Thilo Schaller. Other original compositions include works by Charlotte Bray, Robert Myers, Malte Giesen, and Roderik de Man. Audiences can enjoy a live performance of those works plus a host of others during the September concert, including an arrangement of Bernstein’s West Side Story, and Gavin Whitlock’s Celtic Suite.

Tickets available online at uleth.ca/tickets or at the box office Monday-Friday 12:30-3:30 and 1 hour before ticketed performances. $20 regular; $15 senior/student/alumni.