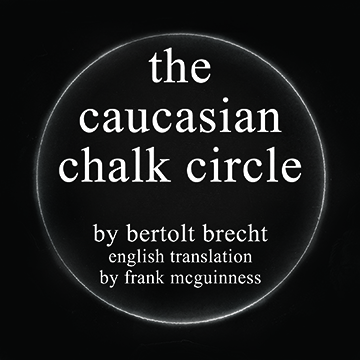 A revolution. An epic journey. A story of class and political struggle. In the end, a child is placed in a chalk circle. Two women, one the biological mother who abandoned the child, the other the child’s caregiver through years of grueling circumstances, are instructed to pull on the child to identify which is the true mother.

The Caucasian Chalk Circle takes audiences on a unique theatre adventure Feb 5-13 at the University of Lethbridge. Bertolt Brecht’s theatre parable is brought to life by director Gail Hanrahan who was inspired to present Brecht’s story the same way he might have presented it today. Audiences share in the epic journey of the story, and also the epic journey of theatre production.

“All the mechanics of live theatre are seen by the audience,” explains Hanrahan. “There is no illusion that they are watching a play. The audience will move around the 4th level of the Centre for the Arts, turning the whole space into the set. The audience is always conscious they are in the University.”

With over 70 characters, the 25 actors each play about five characters. Throughout the evening they remain part of the action, either acting, on the sidelines, moving set pieces, making sound effects or becoming an audience member themselves.

“I enjoy the storytelling aspect of The Caucasian Chalk Circle,” says Hanrahan. “It’s different then what you usually see in the theatre. We’re very clearly putting on a play and not trying to hide any of it.”

Guest lighting and set designer Sandi Somers was invited from Calgary to participate in this rare theatre experience. Typically, a designer meets with the director then goes off on their own to design. With this play the set is in motion so Somers has been in rehearsal each night with the students, participating in the entire process. “The set is almost a character itself. It needed to move and shift as the play developed,” says Hanrahan.

The Caucasian Chalk Circle is the perfect play to present in a University setting because of the young female lead, the long character list that allows for lots of student participation, and Hanrahan’s unique approach allowed students to bring their own creativity and ideas to the table in the development of the production.

Drama major AJ Baragar brought his own dramatic creativity to the stage in his role as the Singer, the story’s narrator, and also took on the challenge of composing the music audiences hear throughout the show.

“AJ and I started working on the music last summer,” says Hanrahan. “Brecht provides the lyrics and AJ wrote all the music. The ‘Singer’ is the storyteller and sometimes he speaks and sometimes he sings. The play is not a musical although it has a lot of music in it.

“The main goal is to present an entertaining piece of theatre,” continues Hanrahan. “This presentation of the play also poses the question of ‘what is theatre?’ Overall it’s a fun piece of theatre, with some romantic scenes, some comedy, and some singing - a little of everything.”