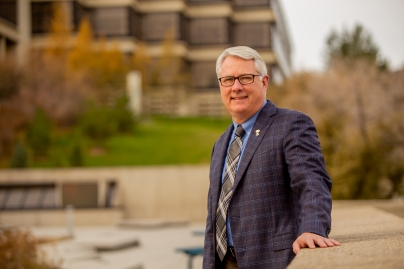 Dr. Michael J. (Mike) Mahon was installed as the President and Vice-Chancellor of the University of Lethbridge in 2010 and after serving two consecutive terms has been reappointed for a third term beginning July 1, 2020.

As the sixth President and Vice-Chancellor of the University of Lethbridge, Dr. Mahon is committed to building a comprehensive, destination university in western Canada.  During his first term, Dr. Mahon introduced “Destination 2020”, the University of Lethbridge Strategic Plan.  Under this plan, Dr. Mahon initiated the “Destination Project”, a monumental construction project whereby he was successful in securing a $260 Million investment from the Government of Alberta, which resulted in the building of Science Commons, a state of the art science and academic building.  In his second term, Dr. Mahon built a successful partnership with Mastercard Foundation, who in turn provided funds for new initiatives to further connect the university to both local and international communities, and more importantly indigenous communities in Southern Alberta.

Dr. Mahon has held several standing provincial and national commitments related to post-secondary education. He most recently served as the Chair of the Council of Post-Secondary Presidents of Alberta (COPPOA). Fall 2019 concluded Dr. Mahon’s two-year term as Chair of the Board of Directors for Universities Canada. He has served on a number of Boards including Canadian University Sport (USports), Alberta Economic Development Authority, the Canadian Olympic Committee, and the Coaching Association of Canada.  Dr. Mahon is the recipient of the Queen’s Diamond Jubilee Medal and an honorary member of the Kainai Chieftainship of the Blood Tribe in Southern Alberta.  His Blackfoot name is Iipisowaahsiiyi (Morning Star).

Dr. Mahon holds a PhD in Education from the University of North Carolina at Chapel Hill.  His current research is in the field of disability studies and sport for development.